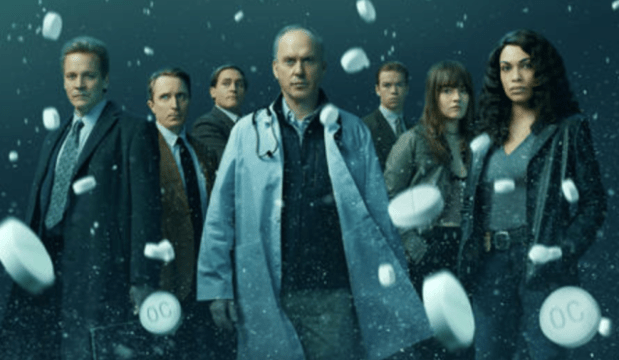 No limited series this year has made the dramatic impact of Hulu’s “Dopesick,” and for good reason. Based on Beth Macy’s nonfiction book, it delivered a searing indictment of the Sackler family and Purdue Pharma, which financed America’s opioid addiction through back-door deals with hospitals, primary care physicians and pharmacies. The riveting material was bolstered by a very strong cast led by Michael Keaton.

The show, which won a Peabody Award this spring, is the leader in the Best Limited Series Emmy category with 37-to-10 odds to win. Its nearest competition, HBO’s breezily entertaining “The White Lotus,” has 4-to-1 odds and is expected to win at least one Emmy for featured player Jennifer Coolidge.

“Dopesick,” on the other hand, could sweep. Keaton, who has already won a Golden Globe and a SAG award for this show, is a slam-dunk to win Best TV Movie/Limited Series Actor. His portrayal of a small-town doc who prescribes opioids for his patients in increasing increments as lower doses of OxyContin do not alleviate their pain is understated and powerful, especially after he gets hooked on the drug when he is injured in a car accident. As a result, he eventually loses his license following a near disaster in the operating room when he is too high to function. His downward spiral and rehabilitation is devastating and realistic.

Michael Stuhbarg, as the evil mastermind of the Sackler family, is a shoo-in for a supporting actor bid, his first since “The Looming Tower” in 2018. Coupled with his compassionate turn as Colin Firth’s lawyer in HBO Max’s “The Staircase,” it’s looking like a very good year for the proven scene-stealer. Peter Sarsgaard may also receive a nomination as a whistle blower on the Sackler family’s nefarious activities.

The women’s roles in “Dopesick” were not as strong or well developed as the men’s but Kaitlyn Dever will rack up an Emmy nomination (her first) for her heartbreaking turn as the youngest member of a mining family who begins taking OxyContin after a work injury and becomes hooked for life, resorting to demeaning ends to score a fix.

With writing, editing and directing nominations assured for executive producer Danny Strong’s team, which includes Oscar-winning director Barry Levinson, “Dopesick” could be the darling of the Emmy awards. It is the one of the most relevant and harrowing limited series to grace the small screen in some time.