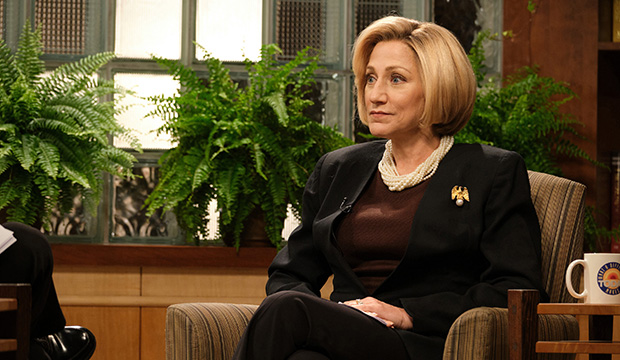 Edie Falco is an undeniable Emmy magnet dating back to 1999. The acclaimed actress earned six Emmy nominations for “The Sopranos,” winning three times, and another six for “Nurse Jackie,” winning once. She also scored a bid for her guest spot on “30 Rock” in 2008 and another lead acting nomination for “Law & Order True Crime: The Menendez Murders” in 2018. Now, she is hoping for her landmark 15th Emmy nomination for taking on the role of Hillary Clinton on “Impeachment: American Crime Story.”

For much of “Impeachment,” which centers on the Monica Lewinsky–Bill Clinton scandal, Falco’s Hillary floats in the background. While she isn’t given as much to do for most of the series, compared to Beanie Feldstein as Lewinsky, Clive Owen as Bill or Sarah Paulson as Linda Tripp, she is an evocative presence that gives an added layer to this fascinating story.

Falco finally gets to sink her teeth into some meaty material in Episode 8, titled “Stand by Your Man,” in which Hillary gives her famous “60 Minutes” interview in which she references the “vast right-wing conspiracy” against her husband. She also deals with public scrutiny and confronts Bill for making her stand by him despite his misconduct. While Falco stays away from mimicry, she does capture the former first lady’s indomitable spirit, delivering the kind of feisty performance that won her three Emmys for playing Carmela Soprano.

Should Falco earn an Emmy nomination in Best Limited Series/TV Movie Supporting Actress, it would be the first time in any of the Television Academy’s supporting categories. She is currently ranked 14th in our latest Emmy nomination odds, which feels surprisingly low considering how much respect she has from Emmy voters. Her nomination for the relatively low-buzz “Menendez Murders” miniseries should be proof that Falco should never be counted out of any Emmy race, especially one in which she plays one of the most iconic political figures in modern history.