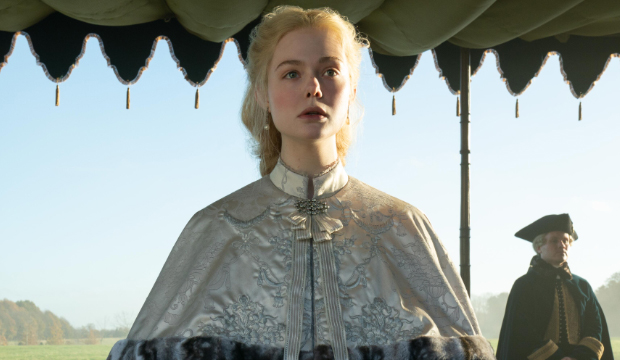 The food is a major plot point in the second season of Hulu’s acclaimed bawdy historical comedy “The Great,” starring Elle Fanning as Catherine and Nicholas Hoult as Peter. Vegetarians may have little appetite for the spreads served in the comedy that run the gourmet scale from a whole pig to a puny rat. During a recent Variety zoom on the series, host Jazz Tangcay admitted “it’s impossible to watch the season without feeling hungry.” “Wow, my favorite subject,” exclaimed Fanning, adding that series creator, show runner and executive producer Tony McNamara is the biggest foodie ever.

“I think everyone on the panel would know it’s my favorite thing-food,” said McNamara, who co-wrote the Oscar-winning 2018 “The Favourite.” Such a favorite thing that when he’s not working, McNamara’s thinking about food and where to go to eat. “Usually everyone on the show is hired and one of our questions is ‘Do you like eating?’ Do you like food?’ Do you like going out?’ It’s partly my obsession that I sort of give to Peter a little bit. It just worked out. It seemed like a really good thing for hedonists that would be his obsession as it is mine, I guess.”

Production designer Francesca Di Mottola joked that she got hired because she is a foodie. She explained it’s up to her and her team to translate what type of food McNamara wants in a scene. “We’re like ‘What would that look back then? What would the ingredients be?’ It’s making it look realistic but also great on camera, edible and that Elle and Nick will be able to eat. That’s not always easy. There’s a lot of research and invention that goes into it. I have to collaborate with many different, very bright people to create those spreads.”

in one sequence, Fanning recalled, Hoult had to eat a squirrel. “In the script it was supposed to be a rat. Because the look of the squirrel kind of mimics the rat, they were like ‘Would you eat squirrel?’ And he said, ‘Yes.’ I  think he regretted that decision a little bit.”

“The Great” premiered in 2020 to strong reviews, earning two Emmy nominations. And the second season, which finds the pregnant Catherine taking over the reins of power from her unpredictable husband, has earned equally stellar praise. The Boston Globe’s Matthew Gilbert enthused: “It’s as bawdy, profane, and thoroughly enjoyable as ever, as it makes fun of political battles, the hollowness of hedonism, the contradictions of marriage, the unsatiable hunger of warmongers and how our unresolved parental issues can drive us to extremes.”

“I felt after season one, the coup was in process,’ explained McNamara.  “Do we have a long coup? In the end I thought it’s more fun if it’s a quick coup that kept him alive and kept them in each other’s worlds and gave Catherine what she wanted but realizing running Russian will be harder [than she thought].”

Fanning knew that the pregnancy would be at the forefront of the second season. “I didn’t look at her as necessarily super maternal. I think the bump is kind of just there in a weird way, kind of a hindrance to her because I think she looks at it more as a ticking time bomb. There’s a lot of ideas and she’s trying to implement them before the baby’s born because after it’s out, she doesn’t necessarily know what’s going to happen with her. I think watching her grapple with becoming a leader in the second season and figuring out if she’s even good at it. That’s something she’s realizing: becoming a mother herself and becoming a mother to a country.

Though the production design is extraordinarily sumptuous, the show is filmed in a little studio in East London located next to McDonald’s. “It’s not elegant,” noted Fanning. “Somehow all of these people make it 1700’s Russia.  t’s gold flecked and we’re walking around in these corsets. It’s quite a beautiful world to be in. It’s inspiring every day.”

Di Mottola said it was a “humongous” job to create the palace, but she got some clarity on the design when the decision was made to concentrate more on how the characters are “so that helped just sort of develop each space. I feel like from then, we sort of found out what the palace was. ‘I feel that Tony spoke about it being like a sort of apartment block. What is it that you said? “ “It’s basically like a big gold apartment complex,” McNamara quipped.