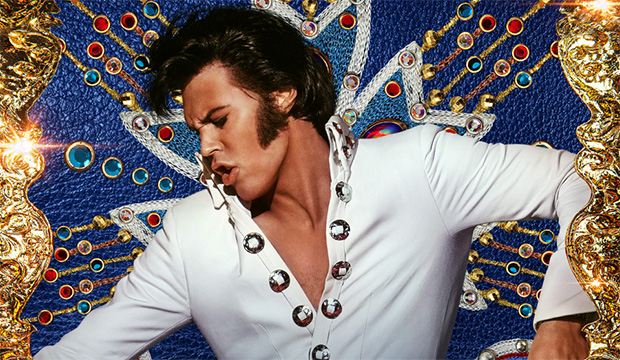 The last weekend of June arrives with not one but two wide releases that may be slightly smaller than the last few weeks’ offerings, since they aren’t sequels, franchises, remakes or based on previous IP persé. Read on for our weekend box office preview.

Filmmaker Baz Luhrmann returns with “Elvis,” his first feature film in nine years, this one about Elvis Presley (obviously), and a biopic filled with the type of musical soundtrack most of Baz’s fans will expect after his 2001 Oscar-winning hit “Moulin Rouge!,” starring Nicole Kidman and Ewan McGregor. It’s Luhrmann’s first feature in theaters since 2013’s “The Great Gatsby,” starring Leonardo DiCaprio, since he was busy making the one-season Netflix series, “The Get Down,” about the birth of hip-hop.

Luhrmann’s latest stars one-time Disney Channel, Nickelodeon and ABC Family regular Austin Butler as the legendary singer that brought rock ‘n’ roll to the (mostly white) masses in the ‘50s and ‘60s before dying of a drug overdose in 1977. More importantly, Baz has cast Tom Hanks as Colonel Tom Parker, Elvis’ notorious manager who led the singer down a number of treacherous paths and whom many still blame for his demise. (That is, those who don’t believe that Elvis is still alive out there somewhere!)

His side jaunt to streaming aside, Luhrmann has had mixed results at the North American box office, but “The Great Gatsby” was his biggest bonafide hit, opening with $50 million in May 2013 and grossing $144.1 million domestically. It also made $200 million overseas, where Luhrmann has always had great success with movies like “Australia” in 2008 and “Romeo+Juliet” making more than $100 million internationally in 1996.

It would be nice to think that “Elvis” can open as big as “The Great Gatsby,” especially with Hanks’ own return to movie theaters after a string of streaming releases on Apple TV+ – Hanks’ Western, “News of the World” hit theaters in December 2020, before they had been reopened post COVID shutdown. Possibly an even bigger draw is the fact that Elvis Presley was such a huge star and celebrity to older folks, especially in the South, which could drive business even if other movies geared towards the older crowd last December (like Steven Spielberg’s “West Side Story”) stalled out with that audience.

Warner Bros. has enough confidence to give the movie a significantly wide release into 3,800 plus theaters this weekend, and its PG-13 rating won’t limit its audience, but the music biopic still only has a few benchmarks, and 2004’s “Ray” ($20 million opening) and 2005’s “Walk the Line” ($22.4 million opening) are the closest. Those two fall releases also had tremendous legs from their Oscar potential, but “Elvis” could and should open significantly better due to a summer release. I think an opening in the $40 million range would be significant, since it will show continued interest in Elvis even 45 years since his death.

Meanwhile, director Scott Derrickson (“Doctor Strange”) returns to horror with “The Black Phone,” a vintage horror film based on a short story by Joe Hill (son of Stephen King), which stars Ethan Hawke, as a creepy character known as “The Grabber” for his proclivity for kidnapping and killing young boys. Set in 1978, the film gets a rare summer release to hopefully bring in younger audiences ala “The Purge” and “The Conjuring” films.

Hawke not only reunites with Derrickson, but also with Jason Blum’s Blumhouse Pictures, who produced Derrickson’s 2012 movie “Sinister” which starred Hawke, who then went on to star in the very first “The Purge” movie. “Sinister” opened with $18 million against Ben Affleck’s eventual Oscar winner, “Argo,” and made $48 million domestic, leading to a sequel a few years later. “The Purge” opened about eight months later with $16.8 million and grossed $64.4 million, leading to four sequels.

Those numbers seem rather apropos for “The Black Phone,” which like both of those other movies, was not a sequel or spin-off from an already-successful franchise (ala “The Conjuring 2” or some of the “Annabelle” spin-offs). Then again, “Annabelle Comes Home” was released in June 2019 to a $20.2 million opening and “The Conjuring: The Devil Made Me Do It” opened with $24.1 million last June. There’s potential for “Black Phone” to open with more than $20 million, for sure, but I think it will end up in the high teens with just so many stronger offerings in theaters. (At least, Universal didn’t go the day-and-date Peacock route as they did with “Firestarter.”)

Both new movies have played at a number of festivals, although “The Black Phone,” at the time of this writing, is doing better on Rotten Tomatoes with 86% Fresh — it’s dropped a lot as new reviews have come in — vs. “Elvis'” 83%. So, both movies have received mostly positive or slightly mixed reviews.

We’ll also want to watch what happens with the rest of the top five and how the two new wide releases might affect things or vice versa. Looking at the possibilities for the top five and presuming that “Elvis” does do well enough to win the weekend, we’re looking at “Jurassic World: Dominion” taking on both “Lightyear” in its second weekend AND “Top Gun: Maverick” in its unstoppable box office run to take second place. Going by recent weeks, “Maverick” will have the smallest drop once again, which could allow it to move back into second place over the two newer releases.

Also, A24 is releasing Dean Fleischer-Camp and Jenny Slate’s delightful “Marcel the Shell with Shoes On” in limited release this Friday. Based on the viral video sensation, the partially stop-motion animated comedy may be A24’s very first PG movie, and positive word-of-mouth is already circulating so that it could end up going wide sometime in July, offering alternative family business for the bigger animated releases from the studios. I’m excited to see how this one plays out.

Check back on Sunday to see how all the movies did at the box office.

2022 box office hits: These 7 movies have already made $100 million domestically