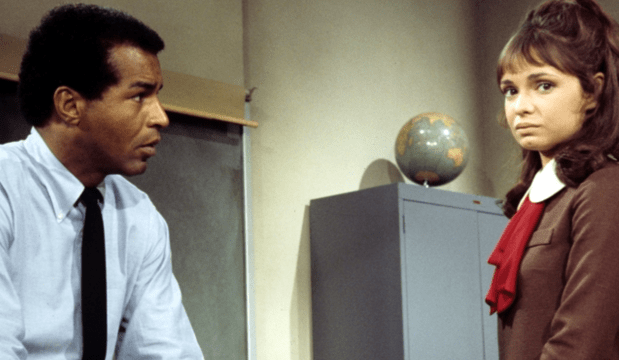 It’s been half a century since David Frost and Danny Thomas hosted the 22nd Emmy Awards, and there are many moments that remain memorable 50 years later. A shift in audience’s tastes during this time can be seen in the nominees from this year, as quite a few new series received nominations and wins, there were some anomalies in the comedy categories and one actress made history, while another shocked viewers with her behavior. Here’s a flashback trip back to June 7, 1970, and shag carpet, TV dials and hoping to get your antenna just right so that you could watch the star-studded gala.

In a reflection of the changing culture, all comedy series up for the top award were first-time nominees in their freshman seasons. This is the last time that there have been no repeat nominations, in either the drama or comedy categories. Not only that, but the winner for Best Comedy Series, the fanciful “My World and Welcome to It,” was canceled after that season, and is the only comedy thus far to win for its only season. Its star, William Windom (later known for playing Dr. Hazlitt on “Murder She Wrote”), received his first and only nomination and win for his role as John Monroe. Both Karen Valentine and Michael Constantine also received their first and only wins in the supporting categories for their roles on “Room 222,” a dramedy set in a multicultural high school (at a time when both “dramedies” and multicultural representation were fairly nonexistent). “Room 222” also won for the now-defunct Best New Series. The only repeat winner was Hope Lange, who received her second consecutive victory for Best Comedy Actress on “The Ghost and Mrs. Muir.”

The trend of new series and first-time winners carried over to the drama side, with the popular “Marcus Welby, M.D.” scoring three big wins for its first season: Best Drama Series, Best Drama Actor for Robert Young and Best Drama Supporting Actor for James Brolin. Despite the popularity of the series and subsequent nominations throughout its seven-year run, these would be the only major wins for this program. Young was the only previous winner in this category (he had won two for his work on “Father Knows Best”). Susan Hampshire won her first of three Best Actress trophies (from three different programs) for “The Forsyte Saga,” making her the first performer to win from a series not produced by one of the Big Three networks. The supporting actress winner was also an historic first.

Gail Fisher had a breakthrough for African Americans in many areas, including beauty pageants, theater work and modeling. On this evening in 1970, she became the first Black actress to earn an acting Emmy, winning for her supporting work on the detective series “Mannix.” This was her only win, although she would be nominated the next three years.

Another actress to receive attention that evening, although for much sadder reasons, was Patty Duke. The former child star and Oscar winner took home her first Emmy for Best Actress for the TV movie “My Sweet Charlie.” Her disjointed speech, faraway expression and jerky mannerisms led the press to brutally speculate that she was on drugs. A decade later, she would be diagnosed with manic depression (now called bipolar disorder), a condition that had tormented her for years before being properly diagnosed and treated. She would later recount that she had not slept in three weeks before the awards ceremony, and was in a deep manic state. Despite this awkward moment, Duke’s career did not falter, and she would go on to receive six more Emmy nominations with two more wins, as well as become an advocate for mental health.

On a lighter note, the evening also saw the first appearance of a beloved character on the Emmys: Big Bird. He had quite the evening, presenting with Dick Cavett and hanging out backstage with Best TV Movie Actor Peter Ustinov, even putting the acclaimed actor’s head in his beak. As it would be another couple of years before Daytime Emmys would be established, Big Bird’s now iconic series “Sesame Street” won its first of many Emmys that evening, earning Best Children’s Program, as well as awards for its writing and music.