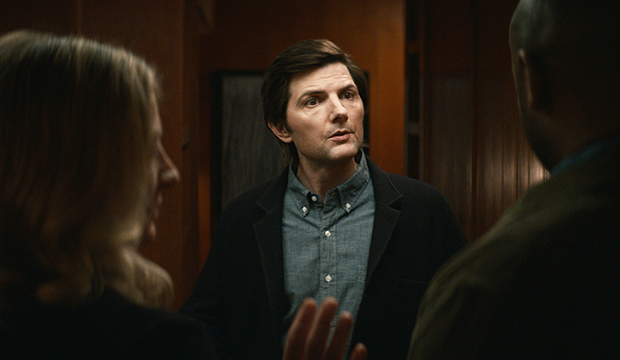 One year after “Ted Lasso” netted them seven Primetime Emmys, the Apple TV+ team are now not only looking to repeat their success in the comedy categories but also to make a splash on the drama side. The latter prospect mainly hinges on “Severance,” the first season of which has earned 14 nominations across 12 categories, including one for Best Drama Series and another for series lead Adam Scott. This acting notice is Scott’s first and comes nearly three decades into his career, which now includes regular roles on seven different series.

Scott has submitted the premiere episode of “Severance,” entitled “Good News About Hell,” for Best Drama Actor consideration. In the installment, his character, Mark Scout, is introduced as a macrodata refinement drone for Lumon Industries who is soon promoted to chief of his department. As Scout interacts with a new hire, the mystery surrounding the idyllic company is gradually brought to light, as it is revealed that he and his fellow employees have each elected to have their work and life memories surgically separated. He is then shown to be leading an (almost) entirely distinct life outside of the Lumon building as a suburbanite who is desperate to alleviate the pain of losing his wife.

As one of the producers of “Severance,” Scott also shares in the show’s Best Drama Series nomination. Over the years, he has served in the dual role of star and producer of several other programs, including the sitcom “Party Down” and the game show “Don’t.” Since making his acting debut in the pilot episode of the 1994 MTV series “Dead at 21,” he has appeared on such popular shows as “ER,” “Party of Five,” “Six Feet Under,” “Veep,” and “The Good Place.” His best known work remains his five-year stint as Ben Wyatt on NBC’s “Parks and Recreation.”

SEE Adam Scott on how his obsession with ‘The Twilight Zone’ led him to ‘Severance’: ‘This was everything I wanted to do’

Scott’s potential acting victory would make him the first man to win this particular award for a series premiere episode since Rami Malek (“Mr. Robot”) in 2016. Malek was preceded in this regard by Jeff Daniels (“The Newsroom,” 2013), Bryan Cranston (“Breaking Bad,” 2008), Michael Chiklis (“The Shield,” 2002), and James Earl Jones (“Gabriel’s Fire,” 1991). The only other such nominee from the past decade has been Jonathan Majors (“Lovecraft Country,” 2021).

Aside from Scott, the only first-timer in this year’s Best Drama Actor race is Lee Jung-jae (“Squid Game”). The remaining slots are filled by 2020 victor Jeremy Strong (“Succession”) and repeat nominees Jason Bateman (“Ozark”), Brian Cox (“Succession”), and Bob Odenkirk (“Better Call Saul”). Like Scott, Bateman and Odenkirk are also presently nominated as producers of their respective shows. Bateman is also seeking a bookend directing trophy for “Ozark,” having won his first in 2019.