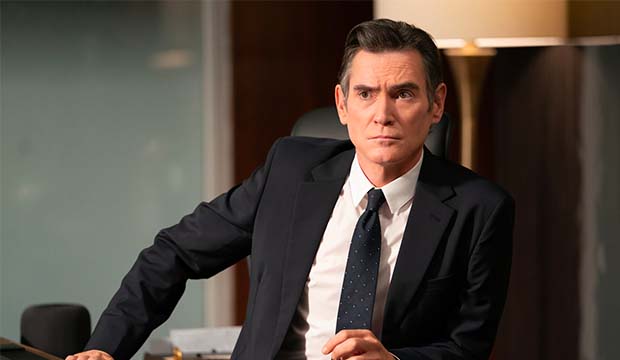 Two years after winning his first Best Drama Supporting Actor Emmy for his portrayal of Cory Ellison on Apple TV+’s “The Morning Show,” Billy Crudup has earned another TV academy notice for his work on the program’s second season. If he succeeds on this outing, he will follow Stuart Margolin (“The Rockford Files”), Michael Conrad (“Hill Street Blues”), Larry Drake (“L.A. Law”), Ray Walston (“Picket Fences”), Aaron Paul (“Breaking Bad”) and Peter Dinklage (“Game of Thrones”) as the seventh man to win multiple supporting Emmys for a drama series. After Conrad, he would also be the second actor to receive this award for each of his show’s first two seasons.

Crudup has submitted the season two premiere episode of “The Morning Show” for Emmy consideration this year. In the installment, entitled “My Least Favorite Year,” Ellison is fired from his UBA network CEO job but soon regains the position with the help of morning news anchor Bradley Jackson (Reese Witherspoon). He then travels hundreds of miles to personally beg Alex Levy (Jennifer Aniston) to return to her post as Jackson’s cohost in order to boost ratings. Although it is not an easy sell, he is eventually able to convince her, and he rides the high of having accomplished the task until news of a wrongful death lawsuit against UBA brings him down.

Crudup has spent most of his career as a feature film actor, beginning 26 years ago with a role in Barry Levinson’s “Sleepers.” His big screen resume includes such varied entries as “Almost Famous,” “Big Fish,” “Watchmen,” “Jackie” and the Best Picture Oscar-winning “Spotlight.” His first TV role was in the 2011 telefilm “Too Big to Fail,” and he played his first regular series part on Netflix’s “Gypsy” in 2017.

The other two “Morning Show” performers in the running for Emmys this year are Witherspoon (lead) and Marcia Gay Harden (guest). The former is new to her category, while the latter has one previous bid in hers for “Law & Order: Special Victims Unit.” Crudup’s potential victory would constitute a trend of Best Drama Supporting Actor winners being honored for season premiere performances, since Tobias Menzies took the 2021 prize for the first episode of the fourth season of “The Crown.”

Among Crudup’s challengers are two pairs of costars: Oh Young-soo and Park Hae-soo (“Squid Game”) and John Turturro and Christopher Walken (“Severance”). Turturro and Walken have been recognized in the Best Movie/Limited Actor category once each, for “The Night Of” (2017) and “Sarah, Plain and Tall” (1991), respectively. The former also received the 2004 Best Comedy Guest Actor prize for “Monk.” This supporting lineup’s remaining slots are filled by “Succession” trio Nicholas Braun, Kieran Culkin and Matthew Macfadyen, all of whom were nominated against Crudup in 2020.