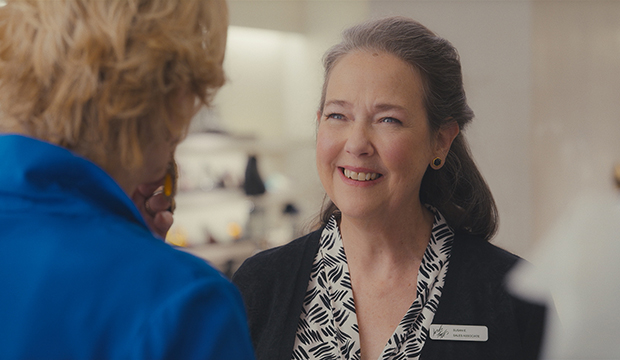 Veteran character actress Harriet Sansom Harris just earned her first Emmy nomination for playing retired stand-up comic Susan on HBO Max’s “Hacks.” She has a Tony win for “Thoroughly Modern Millie” under her belt and decades of memorable TV appearances, but has shockingly never scored an Emmy nomination until now. If the actress wants to turn that nomination into a win, she will have to contend with a slew of her co-stars from the popular comedy series.

Harris is one of four nominees in the Best Comedy Guest Actress category from “Hacks.” Jane Adams, Laurie Metcalf and Kaitlin Olson also contend for the award, which clearly shows ample support for the series within the TV academy (as if the 17 total nominations for “Hacks” wasn’t evidence enough). Adams returns to the category after scoring a bid last year. Olson has one previous nomination while Metcalf has snagged three wins from 12 nominations. These women are joined by five-time Emmy winner Jane Lynch (“Only Murders in the Building”) and three-time nominee Harriet Walter (“Ted Lasso”).

Harris has submitted the episode “Retired.” When Deborah (Jean Smart) realizes that her favorite perfume is being discontinued, her tour bus makes an emergency stop at Lord & Taylor. After buying every bottle from the beauty counter, she runs into her old friend Susan, a fellow comic who worked the stand-up circuit when both women were in their 20s. Susan is retired now, working for commissions in the shoe department. Deborah feels immense guilt because of a past transgression: Believing that only one slot would be awarded to a female comic in a coveted comedy showcase, Deborah erased Susan’s name from the winners list. Deb won the spot and Susan soon quit the business. As a mea culpa, Deborah invites Susan to her gig at the nearby county fair. But her set is completely upstaged by the birth of a baby cow being broadcast behind her and Susan looks on as the entire audience heads for the exits.

Harris gets ample opportunity to volley crass and hysterical one-liners with Smart, but the actress’ best moment arrives when Deborah comes clean about her past misdeed. Susan didn’t quit comedy because she didn’t nab the spot in the showcase; she left the stage because she realized she would have to become like Deborah. “I had a vision of the kind of person I’d have to be in order to make it,” she confesses. “You were completely devoted to your work. … I couldn’t do it. Or I didn’t want to.” Harris conveys mountains of emotion with just a wry smile or the twinkle in her eye during this scene, as it becomes clear she is content with her simple life. Before leaving the fair, she totally upends Deborah’s world by gently cooing, “You hang in there.” Deborah pitied Susan for her lack of fame and success, but Susan reveals that Deborah is who should be pitied.