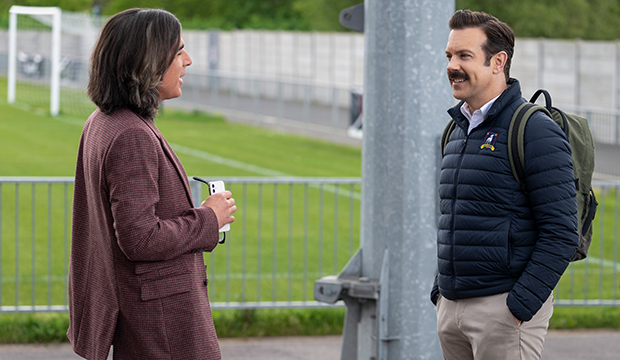 In 2008, the second season of “30 Rock” tied the record set by “The Cosby Show” in 1986 for earning most same-year comedic performing bids at nine. One year later, the Tina Fey-led sitcom raised that bar to its current position of 10, which no traditional (i.e., non-sketch) comedy series was able to touch until “Ted Lasso” did so this year. Half of the 10 actors nominated for the Apple TV+ show’s second season were also recognized for its first year, while four of the remaining five are total Emmy newcomers. Included in the latter subset is guest competitor James Lance, whose first TV academy notice has come three decades into his career.

To date, Lance has appeared as Independent reporter Trent Crimm in 10 “Ted Lasso” episodes. He is presently nominated in the Best Comedy Guest Actor category for his performance in the second season finale, entitled “Inverting the Pyramid of Success.” Set after the publication of Crimm’s write-up on the titular AFC coach’s mid-match panic attack, the episode marks the probable end of the pair’s once-thorny professional relationship. Crimm ultimately tells Lasso that, by confessing to having preemptively contacted him about the article and its source, he instigated his own firing. It then becomes clear that the situation has benefitted both parties, as Lasso is more aware of his vast support system and Crimm has a chance at pursuing a new passion.

Lance made his screen debut at age 13 on the long-running BBC children’s series “Jackanory.” Since then, the 47-year-old has played roles on four dozen primarily British programs, including “Absolutely Fabulous,” “I’m Alan Partridge,” “Black Mirror” and “Midsomer Murders.” He has also worked under such feature film directors as Edgar Wright (“A Fistful of Fingers”), Sofia Coppola (“Marie Antoinette”) and Nicolas Winding Refn (“Bronson”).

Lance’s potential victory would make him the seventh general first-time Emmy nominee to take this prize since the turn of the century. That list is currently comprised of John Turturro (“Monk,” 2004), Katt Williams (“Atlanta,” 2018), Luke Kirby (“The Marvelous Mrs. Maisel,” 2019) and “Will & Grace” guests Gene Wilder (2003), Bobby Cannavale (2005) and Leslie Jordan (2006). Lance would also be this guest category’s first winner since Kirby to be honored for a season finale performance.

Those challenging Lance are his “Ted Lasso” castmate Sam Richardson, other first-timers Jerrod Carmichael (“Saturday Night Live”) and Christopher McDonald (“Hacks”), and past contenders Bill Hader (“Curb Your Enthusiasm”) and Nathan Lane (“Only Murders in the Building”). Lane is the new solo record holder for most bids in this category, having previously amassed five for “Frasier” (1995), “Mad About You” (1998) and “Modern Family” (2011, 2013, 2014). Hader was recognized here in 2015 and 2018 for hosting “Saturday Night Live” and is concurrently vying for his third Best Comedy Actor trophy for “Barry.”