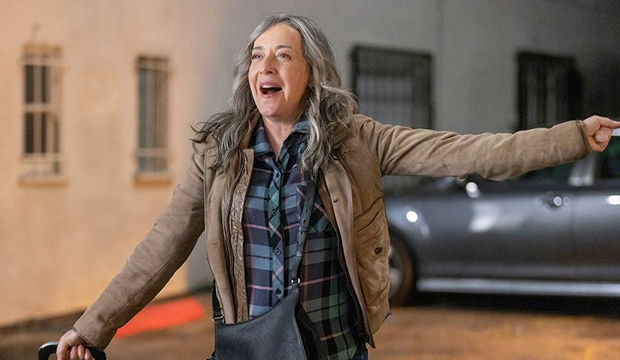 After a career of varied and memorable TV appearances, Jane Adams nabbed her first Emmy nomination last year for playing Nina on HBO Max’s “Hacks.” Her guest stint as Ava’s (Hannah Einbinder) eccentric mother won over voters again in Season 2, earning her a second consecutive nomination for this role. Last year, Adams was the only “Hacks” cast member in the Best Comedy Guest Actress race, but this time she has competition from her own series.

“Hacks” dominates the category with four contenders. In addition to Adams, Harriet Sansom Harris, Kaitlin Olson and Laurie Metcalf are also nominated. Metcalf is the only past winner of the “Hacks” foursome, having prevailed three times for “Roseanne.” Five-time Emmy winner Jane Lynch (“Only Murders in the Building”) and three-time nominee Harriet Walter (“Ted Lasso”) round out the category.

Adams is nominated for her performance in “The Click.” In this installment, Nina shows up unexpectedly at Deborah Vance’s (Jean Smart) tour stop in Memphis to spend time with Ava. After making her surprise entrance in the parking lot behind the comedy club, Nina encourages Deborah, Ava and Kiki (Poppy Liu) to head out to a country Western bar for a girls’ night (“Moms’ night out then! Plus Ava,” she shrieks with excitement). At the bar, Nina offers maternal advice to the women and reveals she has a job selling vitamins in a pyramid scheme, much to her daughter’s chagrin. The mother and daughter pair quarrel the next morning when Nina accidentally ruins Ava’s joke book, but they reconcile over memories of Nina’s late husband.

Of the four “Hacks” women nominated, Adams is the only cast member repeating a nomination from last season, making her a clear favorite. Her episode submission allows her to showcase great range as an actress. She has some delightfully deranged moments and comical mechanical bull-riding sequence (complete with a perfectly executed pratfall as she’s tossed off the mechanism). Adam’s biggest asset, however, is the endearing quality she brings to Nina. You root for her because she’s a woman trying desperately to find a new path in life after the death of her husband (“I have all this time on my hands now. And I was hoping that you would just be proud of me for doing something”). Other characters on the show are full of narcissism, but audiences will feel like Nina is the beating heart of this installment.