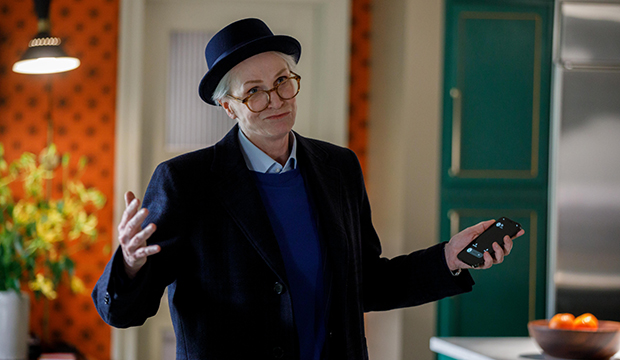 Jane Lynch is looking to pick up her sixth career Emmy Award this year. She’s gunning to do it in the Best Comedy Guest Actress category for her performance as Sazz Pataki, Charles’s (Steve Martin) old stunt double, on the first season of Hulu’s “Only Murders in the Building.”

Her submission is the penultimate episode of the first season, “Double Time.” In the midst of caring for Jan (Amy Ryan) after her stabbing, Charles learns that Sazz is stopping by to visit during the annual stunt convention. Sazz then shows up dressed exactly like Charles and, much to Jan’s shock, is a woman. As she takes a call from her agent (disclosing that she’ll be doubling for Tilda Swinton), Charles reveals that Sazz would also double for him in sex scenes, that everyone loved her more than him and that his ex-girlfriend had left him for her.

As Oliver (Martin Short), Mabel (Selena Gomez) and Oscar (Aaron Dominguez) show up (and repeatedly mistake Sazz for Charles) to try to piece Tim’s murder together, Sazz reminds them that they are clearly ignoring the crime’s motive, pointing to several clues that would indicate his murder was a crime of passion and that his suicide note is actually an “accidental confession.” When the rest of the group goes to a building meeting, Sazz volunteers to keep watch over Jan, much to Charles’s chagrin. When the group returns, they see Sazz helping Jan with her shirt off, leaving Charles to believe that Sazz is stealing another girlfriend of his, but Jan explains that Sazz was helping change her bandages.

Later, Sazz reveals that Charles’s ex left her for another man and confides that she never understood how Charles could have such a low opinion of himself while being a genuinely good person. When Charles admits that he thinks Jan is pulling away from him, she reassures him that the connection he has with Jan is worth fighting for and encourages him to go to Jan’s concert to support her, which he does.

Lynch has a lot of things going in her favor. In the race itself, Lynch is one of two nominees who is not from “Hacks,” the other being Harriet Walter for “Ted Lasso.” “Hacks” fielded four nominees, Jane Adams, Laurie Metcalf, Harriet Sansom Harris and Kaitlin Olson. In addition to the fact that Lynch is a proven Emmy favorite, her performance is the epitome of why actors have loved rewarding her. The reveal of her being Martin’s stunt double is hilarious enough on its own, but the way she mirrors his mannerisms, nonchalantly takes his food he was making for himself and remarks about how Swinton and Martin have the same shoulder and hip measurements bring the performance to the next level.

She also gets to showcase range, which can be so critical to picking up the win. The frankness and tenderness she displays during the one-on-one scene with Martin towards the end of the episode is extremely moving. The way she gets Martin to go and attend Jan’s big concert leaves you cheering for him as much as she is.