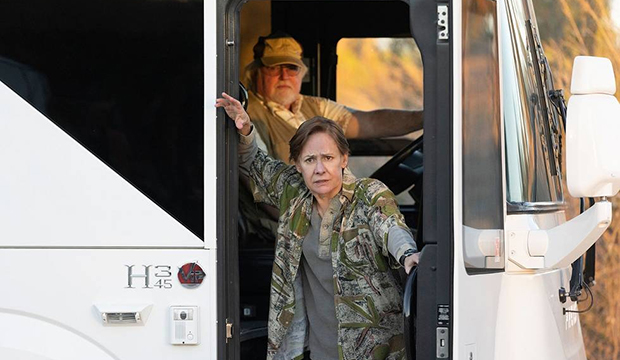 Emmy darling Laurie Metcalf has added another nomination to her tally, thanks to her performance as no-nonsense tour manager Weed on HBO Max’s “Hacks.” Though she is frequently invited to TV’s big night as a nominee, it has been 28 years since the actress won her last award. Can her latest nomination in the Best Comedy Guest Actress race break that dry spell?

This bid marks Metcalf’s 12th Emmy nomination. She first competed in Best Comedy Supporting Actress for “Roseanne” in 1992 and won that category for three consecutive years (1992-94), with an additional nomination in 1995. A string of guest acting nominations followed for her stints on “3rd Rock From the Sun” (1999), “Monk” (2006) and “Desperate Housewives” (2007). Then the Oscar nominee pulled off three Emmy nominations in a single year in 2016: Best Comedy Guest Actress for “The Big Bang Theory,” Best Drama Guest Actress for “Horace and Pete” and Best Comedy Actress for “Getting On.” In 2018, she returned to the comedy supporting actress category for the reboot of “Roseanne,” now known as “The Conners.”

If Metcalf wants to add a fourth Emmy to her mantle, she will have to sneak past her “Hacks” co-stars, as the series claimed four of the six slots in this race. In addition to Metcalf, Jane Adams, Harriet Sansom Harris and Kaitlin Olson are also nominated. Adams scored her first ever Emmy nomination last year in this category and, like Harris and Olson, is still searching for her first win. Five-time Emmy winner Jane Lynch (“Only Murders in the Building”) and three-time nominee Harriet Walter (“Ted Lasso”) round out the category.

Metcalf is nominated for her performance in the episode “Trust the Process.” When Deborah’s (Jean Smart) tour bus rolls up, out steps new tour manager Alice, who insists everyone call her by her nickname Weed. “When Pete Wentz gives you a nickname, it sticks,” she chuckles to herself. The gruff Weed is obsessed with sticking to her tight itinerary, doesn’t like drama and identifies as an “upright sleeper” (“I’m gonna outlive all you. Horizontal sleeping is terrible for ya, blood pools up, its poison”). Late one night, it’s revealed that Weed mistakenly threw out the ashes of Ava’s (Hannah Einbinder) dad, which were in a tennis ball canister. The bus is ordered to turn around so that the team can search through dumpsters to find them. Ava spreads a portion of the ashes over the Grand Canyon as Weed barks: “This reroute killed us. Let’s bottle up papa, ladies, and hit the road, Jack!”

The actress smartly creates a gruff character whose delivery makes her stand out from the rest of the cast. Her dry delivery provides instant contrast from the likes of Ava or Deborah since Weed’s matter-of-fact sensibility contradicts their rapid-paced dialogue. Metcalf is a constant riot, whether she is discussing conspiracies within the mattress industry or lamenting changes to her itinerary (“no unscheduled stops!”). Her ability to elicit big laughs from a mere handful of clever line deliveries makes her a force to be reckoned with in this Emmy race.