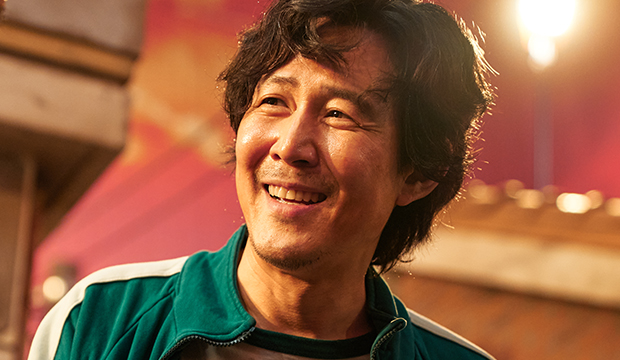 Last September, “Squid Game” set a new precedent among all Netflix programs by amassing a first-month viewing hours total of 1.65 billion. It thus became the streamer’s most-watched show of all time, more than doubling the previous record set by “Money Heist” and even withstanding subsequent challenges from “Ozark,” “Bridgerton,” and “Stranger Things.” The Korean series has now earned 14 Emmy nominations, including one for Best Drama Series and another for star Lee Jung-jae. Having already triumphed at the SAG and Critics’ Choice Awards this spring, Lee now has a solid shot at becoming the first Asian-born Best Drama Actor Emmy winner and the first man to conquer the category for playing a fully non-English language role.

Lee’s “Squid Game” character, Seong Gi-hun, is a single father and gambling addict who, along with 455 others, participates in a deadly series of mental and physical challenges in hopes of winning a large cash prize. The actor has decided to have Emmy voters consider his work in the first season’s sixth episode, “Gganbu,” which centers on the fourth round of the contest. In the installment, Seong and his chosen game partner, then known only as Player 001 (Oh Young-soo), are each given 10 marbles and told that only the one who manages to win the other’s entire set will survive. Seong ultimately succeeds in prevailing over his new gganbu (or “trusted friend”), but, in doing so, slips deeper into the throes of moral guilt.

Lee made his TV acting debut on the 1995 Korean crime drama series “Sandglass.” Since then, he has starred on several other series produced in his home country, including “Air City” and “Chief of Staff.” Of the dozens of theatrical films on his resume, three (“Along with the Gods: The Two Worlds,” “The Thieves,” and “Assassination”) rank among the top eight highest-grossing features in South Korean history with over 12 million admissions each.

SEE Will Lee Jung-jae (‘Squid Game’) be the 6th in 11 years to win Best Drama Actor Emmy for first-year show?

The other four actors nominated for the first season of “Squid Game” are guest performer Lee You-mi and supporting players Oh, Park Hae-soo, and Jung Ho-yeon. Like Lee, any of them would be the first person to win in their respective category for playing a fully non-English-speaking character. Lee himself could become the seventh Best Drama Actor champion to have been born outside of the United States. Last year’s victor, Josh O’Connor (“The Crown”), originates from the United Kingdom, as do Matthew Rhys (“The Americans,” 2018), Damian Lewis (“Homeland,” 2012), and Kiefer Sutherland (“24,” 2006). The remaining two men on the list – Bruce Willis (“Moonlighting,” 1987) and Raymond Burr (“Perry Mason,” 1959 and 1961) – were born in Germany and Canada, respectively.

Lee is joined in this lead lineup by one other Emmy newcomer: Adam Scott (“Severance”). The other four contenders – Jason Bateman (“Ozark”), Bob Odenkirk (“Better Call Saul”), and “Succession” duo Brian Cox and Jeremy Strong – have vied for this prize at least once each. Strong is the only acting champ in the bunch, having won here against Bateman and Cox in 2020. Bateman, who received a directing Emmy for “Ozark” in 2019, has now been recognized for helming its series finale. He, Odenkirk, and Scott are also presently nominated as producers of their shows.