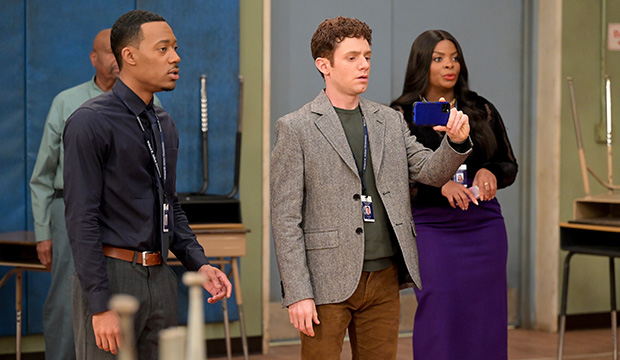 “Abbott Elementary” obviously shares some DNA with “The Office” — between their mockumentary formats, a mutual director in Randall Einhorn, and Tyler James Williams serving the best camera stares since John Krasinski — so perhaps it makes sense that “Abbott” will have to pull off a feat that was last accomplished by “The Office” to win the Best Comedy Series Emmy.

The ABC sitcom scored seven nominations for its breakout first season: comedy series, actress (Quinta Brunson), supporting actor (Williams), double supporting actress (Janelle James and Sheryl Lee Ralph), writing (Brunson) and casting. But it was AWOL in one key category: directing. “Abbott” — which submitted two episodes in directing, including the pilot helmed by Einhorn — missed out to “Atlanta,” “Barry,” “Hacks,” “The Ms. Pat Show” (the required multicam nominee), “Ted Lasso” and two episodes of “Only Murders in the Building.” “The Office” was the last show to win Best Comedy Series without a directing nomination, having done so in 2006 when it took home the award for its second season — its only series victory. That year, the “My Name Is Earl” pilot nabbed directing over “The Comeback,” “Curb Your Enthusiasm,” “Weeds” and two episodes of “Entourage.”

“The Office” is one of just three shows this century to win comedy series without a directing bid, the others being “Friends” in 2002 and “Everybody Loves Raymond” in 2003. “Friends” achieved the unicorn of claiming the top award without nominations in directing or writing, the other vital category (“The Office” and “Raymond” had writing bids, with the former losing to “My Name Is Earl” as well and the latter winning).

But a lot has changed in 16 years. For one, all three of these victories occurred under the tape system, which was eliminated after 2014 in favor of a popular vote system in which members vote in their respective branch categories and all members vote in program categories. That’s to say not to count out “Abbott,” which continues to build momentum, including pocketing four Television Critics Association Awards, as we head into the homestretch. It has risen to third in the comedy series odds, behind defending champ “Ted Lasso” and “Hacks,” while Brunson is in second in actress (to reigning champ Jean Smart for “Hacks”) and writing (also to 2021 champ “Hacks”) and surging by the minute.

Nevertheless, the fact remains that even under the current system, no show has won comedy series without a directing nomination yet. What’s more, no show under this system has won comedy or drama series without both directing and writing bids. You don’t need to win either of them to snag series — “Ted Lasso” lost both to “Hacks” last year — but it’s more like the nominations signal that the support is there from two important branches. Of course, we’ll never know how close “Abbott” was to a directing nomination.

“Ted Lasso,” “Hacks,” “Only Murders in the Building” (fourth in the odds) and “Barry” (fifth) are the only comedy series nominees that made directing and writing. “Abbott” and “What We Do in the Shadows” (seventh) have writing bids — two for the latter — but no directing, while “Curb Your Enthusiasm” (eighth) and “The Marvelous Mrs. Maisel” (sixth) have neither. So either this trend will continue for another year or “Abbott” will be able to defy that stat and school them all.

Emmy odds for Best Comedy Series
What will win?