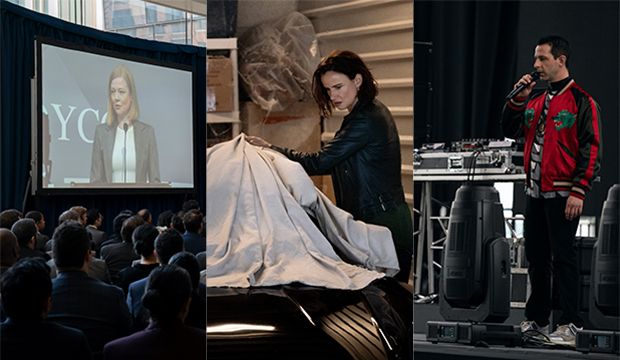 Last year, Jessica Hobbs became just the fourth woman to win the Best Drama Directing Emmy when she prevailed for helming “War,” the Season 4 finale of “The Crown.” This year, three women have a chance to grow that number to five and make it back-to-back female champs for the first time ever.

Karyn Kusama (the “Yellowjackets” pilot), Lorene Scafaria (“Too Much Birthday” from “Succession”) and Cathy Yan (“The Disruption” from “Succession”) are vying for the prize alongside former champ Jason Bateman (“A Hard Way to Go” from “Ozark”), Hwang Dong-hyuk (“Red Light, Green Light” from “Squid Game”), Mark Mylod (“All the Bells Say” from “Succession”) and Ben Stiller (“The We We Are” from “Severance”). Kusama, Scafaria and Yan are looking to join Hobbs, Karen Arthur (“Cagney & Lacey,” 1985) and Mimi Leder (“ER,” 1995) and Reed Morano (“The Handmaid’s Tale,” 2017) as the handful of women to win the category.

That number is embarrassingly small, but voters have been nominating more women in recent years. This is the third consecutive year that three women have been nominated simultaneously in drama directing. In 2020, Hobbs (“The Crown”) and Leder (“The Morning Show”) were shortlisted alongside Lesli Linka Glatter for “Homeland”; they lost to Andrij Parekh for “Succession.” Last year, Liz Garbus (“The Handmaid’s Tale”) and Julie Anne Robinson (“Bridgerton”) were the other female nominees.

At the moment, neither Kusama nor Scafaria nor Yan is predicted to win. In fact, they make up the bottom three of the seven contenders in the odds in that same order. Hwang leads the way for the “Squid Game” series premiere, and while the award is technically supposed to recognize one episode, he might score some extra points from any voter who is aware that Hwang directed (and wrote) every episode of the season — something no one else in this race can claim. Stiller is in second place for the “Severance” Season 1 finale, followed by Mylod in third for the “Succession” Season 3 closer. Mylod took home the Directors Guild of America Award for the episode in an all-“Succession” field of five earlier this year. Scafaria was also nominated at DGA, but Yan was not. Bateman is smack in the middle in fourth place for the “Ozark” series finale.

But don’t think this is a done deal. The directing branch has thrown a curveball in this category ever since Morano was the last odds-on favorite to triumph. In 2018, “The Handmaid’s Tale” was expected to repeat for a Kari Skogland-helmed hour, but Stephen Daldry, who was in fourth place, was victorious for “The Crown.” In 2019, Bateman was as shocked as all of us over his “Ozark” win. He was in sixth place out of seven, with the “Game of Thrones’” series finale predicted to prevail. For the past two years, the odds got the show right but the wrong episode. In 2020, Mylod was in first place for the “Succession” Season 2 finale “This Is Not for Tears,” but Parekh, who was in fourth place, edged him out with “Hunting,” aka “boar on the floor.” Last year, Benjamin Caron was predicted to win for “Fairytale” from “The Crown,” while Hobbs was also in fourth place.

Perhaps the moral of the story is we should pay attention to whoever’s in fourth place, which is Bateman in this case. Of the three women, Kusama may have the best shot, simply because “Succession” has three nominations and that’s been an impossible vote-split to overcome in directing under the current system. “Game of Thrones” couldn’t do it. Neither could “Veep” (twice), “Ted Lasso,” “The People v. O.J. Simpson: American Crime Story” or “Watchmen”. All of these shows won series those years, as “Succession,” with its leading 25 bids, is expected to do. But with upset after upset after upset after upset in this category, it’d be foolish to count anyone out.