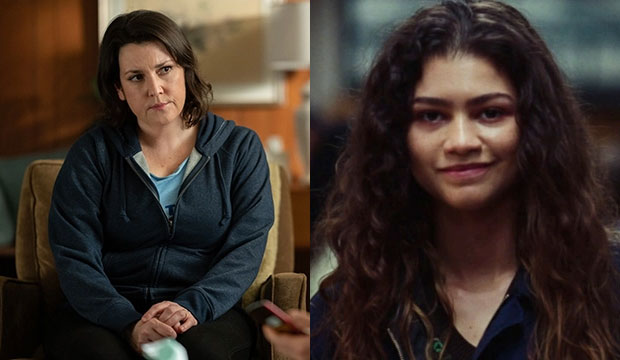 Zendaya won Best Drama Actress at the Emmys in 2020 when the provocative teen drama “Euphoria” only had six total nominations. Now it has 16 nominations including Best Drama Series, so it’s no surprise that the combined predictions of thousands of Gold Derby users favor her to win again. But the Expert journalists we’ve surveyed from major media outlets are leaning in another direction: they say Melanie Lynskey (“Yellowjackets”) has a slight edge.

As of this writing Lynskey is backed by nine Experts, while Zendaya is predicted by seven. “Yellowjackets,” about a girls’ soccer team stranded in the wilderness and the aftermath decades later, scored seven Emmy noms overall including Best Drama Series, Best Drama Writing, Best Drama Directing, and acting noms for Lynskey and supporting actress Christina Ricci. And Lynskey has been the focus of a lot of the show’s positive attention, winning a Critics Choice Award and earning a Television Critics Association nomination.

But if Zendaya was able to win in 2020 when her show had much less support from voters, shouldn’t she be a shoo-in now that “Euphoria” is one of the top dramas? That’s a logical conclusion, and indeed our Editors, Top 24 Users, and All-Star Top 24 agree with that. Majorities of all those groups are anticipating another Zendaya victory. However, no actress has repeated in Best Drama Actress since Julianna Margulies won her second trophy in 2014. Instead, Zendaya could wind up like Elizabeth Moss, who won for “The Handmaid’s Tale” in 2017 but then lost to Claire Foy (“The Crown”) in 2018 despite “Handmaid’s” getting lots more nominations in season two (20) than it had in season one (14).

And looking at it from the flip side, “Yellowjackets” has way more above-the-line support now than “Euphoria” had in 2020 when Zendaya won, so theoretically Lynskey doesn’t have nearly as tough of an uphill climb. So don’t be surprised if the Experts are right and she pulls this one out.