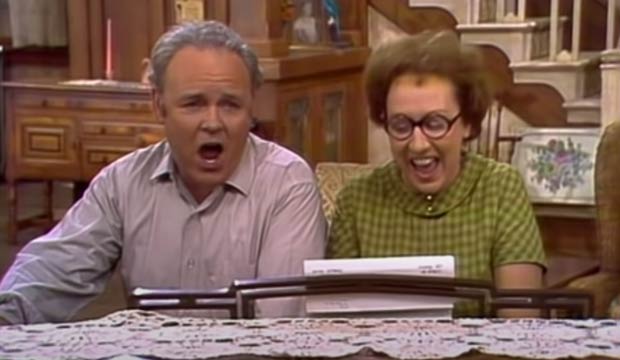 It’s been half a century since Johnny Carson hosted the 24th Emmy ceremony on CBS on May 14, 1972. It was a year in which now-classic comedies battled it out and records were set, PBS had its first strong showing, Oscar-winning actresses were rivals and daytime-themed Emmys were awarded for the first time. Read on for our Emmys flashback 50 years ago to 1972.

Norman Lear‘s groundbreaking sitcom “All in the Family” had won Best Comedy Series for its freshman season in 1971; it held onto that title for its second year, and would win again in 1973 and 1978. The biggest competition for this award was another groundbreaking comedy that had premiered the year before, “The Mary Tyler Moore Show,” which would eventually claim victory in 1975, 1976 and 1977. The remaining nominees were “The Odd Couple,” also in its second season, and “Sanford and Son,” for its freshman outing. “All in the Family” and “MTM” would not only compete for Best Comedy over the next five years, but performers from these two series became perennial favorites in the acting categories.

For his role as Archie Bunker, Carroll O’Connor won his first of four Emmys for Best Comedy Actor (he’d win a fifth on the drama side for “In the Hear of the Night” in 1989). His competition included first-time nominee Redd Foxx, who never claimed a win despite three nominations for “Sanford and Son.” “The Odd Couple” costars Jack Klugman and Tony Randall were constants in this category from 1971-1975, with Klugman victorious in 1971 and 1973, and Randall in 1975.

SEE Emmys flashback 20 years ago to 2002, when ‘Friends’ finally won and ‘The West Wing’ dominated

For her role as Archie’s ditzy wife Edith, Jean Stapleton took her second consecutive Best Comedy Actress Emmy for “All in the Family;” she’d win again in 1978. Mary Tyler Moore, who had previously prevailed twice for “The Dick Van Dyke Show,” would begin her winning streak for “MTM” the next year, claiming victory in 1973, 1974 and 1976. These two ladies claimed spots in this category every year between 1971 and 1977, except for 1976 (Stapleton failed to get a bid that year). Rounding out the category at the 1972 ceremony was Sandy Duncan, who was up for her short-lived sitcom “Funny Face.”

PBS also achieved a first, with its British limited series “Elizabeth R” providing that network’s first win for Best Drama Series, as well as the first non-American series to claim this honor (it also won for the now-defunct Best New Series). The award for limited series/miniseries did not exist until 1973; before that, these productions were lumped in with continuing dramas. “The Six Wives of Henry VII” also made it into this category, even though it was a series of six television plays. Familiar shows that rounded out this category were “Marcus Welby,” which had won two years prior; “Mannix,” which was up for the first time in its fifth season; and the first season of the long-running “Columbo,” which would go on to receive numerous nominations over the next three decades.

Another milestone from “Elizabeth R” was Glenda Jackson‘s three nominations for her role as Queen Elizabeth I. Due to rule and category changes, this can no longer happen; but this accomplished actress won two of those bids. Her first win was for Continued Performance by an Actress in a Lead Drama role, which pitted her against Peggy Lipton (“The Mod Squad”) and Susan Saint James (“McMillan & Wife”).

Jackson’s other bids and win were for Single Performance by an Actress in a Leading role, for which she was nominated for two individual episodes as opposed to the series whole. This category included an impressive roster of Academy-Award-winning actresses. Jackson herself had won her first Best Actress Oscar the year before; her competition included fellow Oscar winners Patricia Neal, up for her role as Mama Olivia on “The Waltons,” and future EGOT recipient Helen Hayes, up for “Do Not Fold, Spindle or Mutilate.” Rounding out this category was Susannah York for “Jane Eyre.”

For Continued Performance by an Actor in a Drama, Peter Falk received his first of five Emmys for playing the titular “Columbo” (he had previously won for “The Dick Powell Show”). All the men in this category were up for their title roles, with two being Emmy favorites. Robert Young had won twice for “Father Knows Best” 15 years prior; this was his third and final nomination for “Marcus Welby, M.D.” (he won in 1970). Having won twice for “Perry Mason,” Raymond Burr lost all of his bids for “Ironside” from 1968-1972; Mike Connors also lost all of his bids (1970-1973) for his TV detective “Mannix.” The final nominee was Keith Michell, who, like Jackson, received a nomination in this category as well as Single Performance by an Actor in a Lead Role, for his performance in “The Six Wives of Henry VII.” He triumphed in that category, over George C. Scott (“Jane Eyre”), Richard Harris (“Hallmark Hall of Fame: The Snow Goose”) and James Caan and Billy Dee Williams, both for “Brian’s Song.”

This was the first year a daytime-themed Emmy was awarded, with soap opera “The Doctors” winning Best Achievement in Daytime Drama. Two years later, the Emmys would be split into Primetime and Daytime. Also up that first year was “General Hospital,” which has the most wins for Best Drama at 15, and is the current holder of this title.