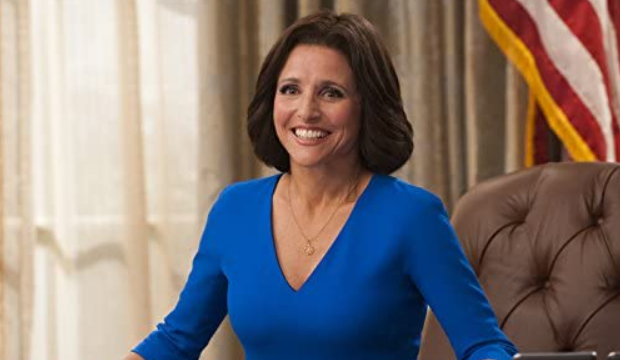 It was a good night for “Modern Family,” “Homeland” and PBS and the start of an impressive streak for a favorite comedienne, while a drama’s winning streak came to a screeching halt. Jimmy Kimmel helmed the 64th Primetime Emmys on ABC on September 23, 2012, his first time hosting this awards show. Read on for our Emmys flashback 10 years ago to 2012.

“Modern Family” reigned over the Emmys in its first few years, claiming Best Comedy for each of its first five seasons, from 2010-2014. A decade ago, it was in the middle of this streak, not only winning in this category, but tying for most nominations (nine) and wins (four) of the night. The other five nominees in this category were “30 Rock,” “The Big Bang Theory,” “Curb Your Enthusiasm,” “Girls” and “Veep,” which did score a major victory.

Julia Louis-Dreyfus started her six-year winning streak for Best Comedy Actress for her role as Selina Meyer on “Veep.” She added this trophy to her previous wins for “The New Adventures of Old Christine” and “Seinfeld” (for supporting); she currently ties with Cloris Leachman for most acting Emmys. She prevailed over the winners from the previous two years, Edie Falco (“Nurse Jackie”) and Melissa McCarthy (“Mike & Molly”), as well as Zooey Deschanel (“New Girl”), Lena Dunham (“Girls”), Tina Fey (“30 Rock”) and Amy Poehler (“Parks and Recreation”).

SEE Emmys flashback 50 years ago to 1972: ‘All in the Family’ wins comedy, ‘Elizabeth R’ takes drama/limited

For Best Comedy Actor, Jon Cryer broke into another performer’s winning streak. For his role on “Two and a Half Men,” Cryer had previously been nominated six times in supporting, winning in 2009. This was his first and only year in lead, taking the title from “The Big Bang Theory” star Jim Parsons, who took home the prize every other year from 2010-2014. Their fellow nominees included previous recipient Alec Baldwin (“30 Rock”), Don Cheadle (“House of Lies”), Larry David (“Curb Your Enthusiasm”) and Louis C.K. (“Louie”), who lost in this category but won for Best Comedy Writing.

The cast from “Modern Family” never submitted for lead, instead each competing in the supporting categories. This put four of their team against each other for Supporting Actor: Ty Burrell, Jesse Tyler Ferguson, Ed O’Neill and Eric Stonestreet, who won his second trophy for playing Cameron Tucker. Max Greenfield (“New Girl”) and Bill Hader (“Saturday Night Live”) filled the other slots.

“Modern Family” also had two entries for Supporting Actress, with Julie Bowen, like Stonestreet, taking home her second win. Her costar Sofia Vergara also claimed a spot, along with Mayim Bialik (“The Big Bang Theory”), Merritt Wever (“Nurse Jackie”) and Kristen Wiig (“Saturday Night Live”). The final nominee was Kathryn Joosten, who had passed away in June, and received a bid for her performance as Karen McCluskey on “Desperate Housewives,” a role for which she had previously won two Emmys for Comedy Guest Actress.

Like “Modern Family,” “Homeland” took home four major trophies. This included Best Drama Series, breaking “Mad Men’s” four-year winning streak. Unfortunately, “Mad Men” set a new record that evening for most nominations with no wins at 17 (in 2021, “The Handmaid’s Tale” set the new record of 21). Joining these two dramas on the ballot were “Boardwalk Empire,” “Breaking Bad,” “Downton Abbey” and “Game of Thrones.” This year not only marked the first Drama Series win for Showtime, but this was also the first year that none of the major four networks claimed a nomination in Best Drama, Drama Actor or Drama Actress.

In addition to its series win, “Homeland” claimed drama victories for Best Writing, Actor and Actress. Claire Danes won her second career Emmy, and her first of two for her role as Carrie Mathison. She was up against the previous year’s winner, Julianna Margulies (“The Good Wife”) and Glenn Close, who had won twice previously for “Damages.” Also nominated were Michelle Dockery (“Downton Abbey”) and Elisabeth Moss (“Mad Men”), as well as Kathy Bates (“Harry’s Law”), a double nominee who earned the statue for Best Comedy Guest Actress (“Two and a Half Men”).

Damian Lewis from “Homeland” claimed a win on his first nomination for Best Actor. Also competing were Hugh Bonneville (“Downton Abbey”), Steve Buscemi (“Boardwalk Empire”), Michael C. Hall (“Dexter”), Bryan Cranston, who already had three wins for “Breaking Bad” and would win again in 2014, and Jon Hamm, who it seemed would be the perennial loser for “Mad Men,” but would finally win for its final season in 2015. Interestingly, other than Danes’s back-to-back wins in 2012 and 2013, there have been no repeat winners for Drama Actor or Actress in the past decade.

SEE Emmys flashback 20 years ago to 2002, when ‘Friends’ finally won and ‘The West Wing’ dominated

Over in Drama Supporting Actor, Aaron Paul won his second of three Emmys for “Breaking Bad,” edging out costar Giancarlo Esposito. “Downton Abbey” also had two entries, for Jim Carter and Brendan Coyle, while “Mad Men” was represented by Jared Harris and “Game of Thrones” by Peter Dinklage (who would later win three times for that series).

Drama Supporting Actress went to the great Maggie Smith for “Downton Abbey.” The previous year, that series had been classified as a miniseries/movie, and had won in that category, with Smith winning Miniseries/Movie Supporting Actress. Smith’s victory at this ceremony marked the PBS network’s first win in the supporting actress category, and its first in any major acting category since Jean Marsh for Best Actress for “Upstairs, Downstairs” in 1975. Smith’s costar Joanne Froggatt was also recognized, as were Christine Baranski and Archie Panjabi from “The Good Wife,” Christina Hendricks from “Mad Men” and Anna Gunn from “Breaking Bad,” who would go on to win the next two years.

The combined Best Miniseries/Movie prize was given to “Game Change,” for which Julianne Moore won Best Actress for her portrayal of Sarah Palin. Kevin Costner claimed the Best Actor prize in this category, for his role in “Hatfields and McCoys.” The supporting trophies went to Tom Berenger (“Hatfields & McCoys”) and Jessica Lange (“American Horror Story”).