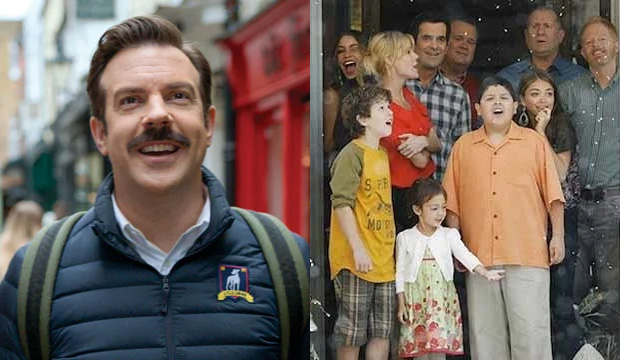 In the decade since ABC’s family program won Best Comedy Series for its first five years on the air (2010-14), only two other shows triumphed in this category for their freshman seasons: “The Marvelous Mrs. Maisel” (2018) and “Ted Lasso” (2021). “Mrs. Maisel” failed to complete the one-two punch when it lost for its second season to “Fleabag” (2019). Can “Ted Lasso” now follow in “Modern Family’s” footsteps?

In addition to “Ted Lasso’s” leading 20 Emmy nominations, it’s also coming off big wins at the Screen Actors Guild Awards, Producers Guild Awards and Critics Choice Awards for Season 2, proving that the buzz is still there for the sports hit. This season delved deeper into the lives of the coaches and players of the AFC Richmond soccer team, with buzzed-about storylines including Ted (Sudeikis) seeing a therapist (Sarah Niles) after having a panic attack, and Rebecca (Waddingham) losing her father and secretly dating Sam (Toheeb Jimoh).

Unlike last year when “Ted Lasso” was savvily airing new episodes during Emmy voting, this time around voters have to rely on continued buzz (and slick FYC campaigns) since the next season likely won’t air until the fall. Word is still out on whether the upcoming third season will be its last.

According to Gold Derby’s Emmy odds, “Ted Lasso’s” biggest competition in Best Comedy Series is “Hacks.” The HBO Max show won three trophies last year for actress (Jean Smart), writing and directing, and could very well win those same three again this year. Also watch out for Hulu’s “Only Murders in the Building” (which emulates “Ted Lasso’s” winning strategy from last year by airing new episodes during voting), ABC’s “Abbott Elementary” (the breakout broadcast mockumentary) and HBO’s “Barry” (which returned after a three-year hiatus). The other nominees are Amazon Prime Video’s “The Marvelous Mrs. Maisel,” FX’s “What We Do in the Shadows” and HBO’s “Curb Your Enthusiasm.”