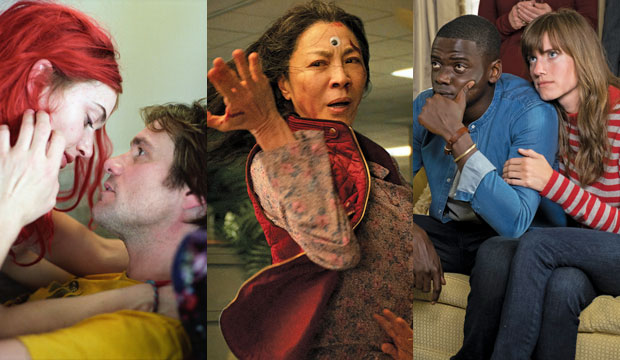 Steven Spielberg‘s “The Fabelmans” had a successful bow at the Toronto International Film Festival, where it won the coveted People’s Choice Award. Since then it’s been holding strong in Oscar Experts’ predictions for Best Picture. However, those elite film journalists are going in a different direction for Best Original Screenplay. They say “Everything Everywhere All at Once” is still the front-runner for that writing prize.

“Everything” was written by DANIELS, the filmmaking duo of Dan Kwan and Daniel Scheinert who also directed the film about a Chinese immigrant (Michelle Yeoh) who must explore multiple parallel universes to save her family and the world. It’s, shall we say, an unusual premise for an Oscar contender as the academy often turns up its nose at outlandish action and sci-fi films. But “Everything” connected with both critics and audiences, and such wildly imaginative storytelling might qualify it as the most original screenplay of the year, and sometimes that’s the key to winning.

SEE‘Everything Everywhere All At Once’: Why this absurdist action-comedy should not be forgotten at awards time

As of this writing “Everything” is predicted to win this writing award by seven Experts. But “The Fabelmans” is still nipping at its heels with support from five Experts. And “The Banshees of Inisherin” is bounding up the chart, currently with two Experts betting on it to prevail. See the current Experts’ predictions chart below, and see the Experts’ complete predictions here.