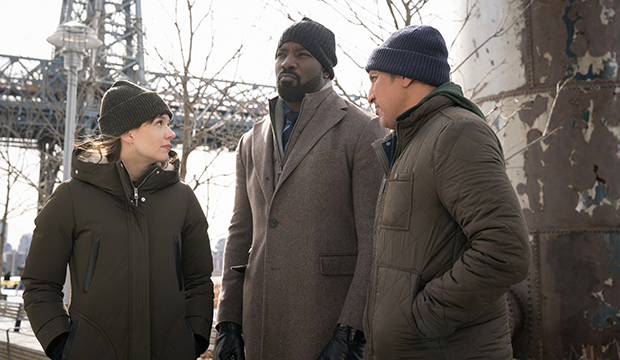 From haunted elevators and a centuries-old demon residing in a silent monastery to zombified warehouse workers and a mummified head, “Evil” ran the horror gamut in its terrific second season on Paramount+. Hailing from the deliciously bonkers minds of Robert King and Michelle King, the series’ sophomore run dialed up the insanity to hilarious, frightful new heights. After missing out on Emmy Awards attention for its debut season, could the series finally scare up its first nominations this year?

The show certainly deserves the recognition. No other series even attempts to strike its balance of philosophical and theological debate, jump scares, biting satire about modern technology and social media, and hilariously gross sight gags. But in Season 2, “Evil” also offered a searing indictment of contemporary American culture, policing and racism. The first season ended on a shocking cliffhanger: Protagonist and mother of four Kristen Bouchard (the wonderful Katja Herbers) murders a serial killer who has been harassing her daughters. Kristen carries this secret and her guilt for nearly half of season two until she unburdens herself in episode “C Is for Cop” to her friend Mira (Kristen Connolly), who also happens to be a detective. Mira ultimately sympathizes with Kristen’s defense of her family and — because Kristen’s white — lets her go free.

WATCH Our exclusive spotlight panel with the ‘Evil’ cast and creators

It’s truly impressive how deftly the series handles both this type of weighty social commentary with fun and stylistically unique episodes like “S Is for Silence,” shot almost exclusively with no dialogue. Written by the Kings and directed by Robert, the episode is a technical marvel and smartly plotted to not feel contrived or gimmicky, as Kristen and her fellow church assessors David (Mike Colter) and Ben (Aasif Mandvi) travel to a silent monastery to investigate the body of a deceased monk that has not decayed at all since his passing. The installment is the perfect encapsulation of the show’s balance of humor (drunk Kristen is a joy to watch) and ickiness (flesh-eating flies bursting out of wounds), and it fittingly was submitted for writing and directing.

“Evil” currently trails in our current combined odds in all of the major drama races, but the show has already achieved some awards breakthroughs for its second season. At the Critics Choice Awards, it earned five nominations for drama series, drama actor (Colter), drama actress (Herbers) and drama supporting actress (Andrea Martin, Christine Lahti). A name like Lahti could appeal to Emmy voters, since she’s a six-time Emmy nominee and past winner for “Chicago Hope.” Of all the cast, she’s giving the most delightfully outrageous performance as Kristen’s mom Sheryl, a hip grandmother who gets dragged over to all things dark and demonic by Michael Emerson’s emissary of evil Leland Townsend. Emerson, too, has a strong track record at the Emmys with five past nominations and two wins (“The Practice,” “Lost”) and would be a deserving nominee for his positively chilling turn as the show’s Machiavellian villain.

The series could also get a visibility boost during this crucial period of Emmy nominations voting as its third season premiered on June 12. Unlike other Emmy contenders that will debut new episodes during these summer months but after nominations voting — “Only Murders in the Building” for one — “Evil” will have dropped three new episodes while voters pick the nominees, which could be a major boon for this overlooked but incredibly deserving series.

PREDICTthe 2022 Emmy nominees by July 12
Emmy odds for Best Drama Series
What will be nominated?