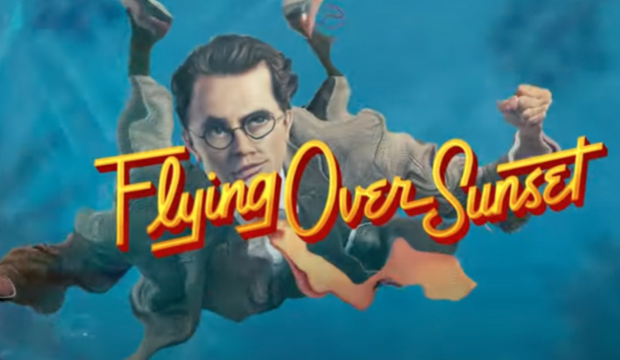 Cary Grant back on Broadway? For five weeks this winter, the debonaire actor treaded the boards again in spirit in the form of Tony Yazbeck, who portrayed the Golden Age movie star in the musical “Flying Over Sunset.” The new show, which was written and directed by Pulitzer Prize-winning dramatist James Lapine, opened at Lincoln Center’s Vivian Beaumont Theatre on Dec. 13, 2021 and closed on Jan. 16, 2022. The wildly ambitious work imagined the LSD-fueled encounters of three creative minds, including Yazbek’s Grant, Carmen Cusack’s playwright and politician Clare Boothe Luce and Harry Hadden-Paton’s novelist Aldous Huxley.

After its slated 2020 debut was halted due to the coronavirus pandemic, “Flying Over Sunset” opened cold on Broadway, a rare original musical not based on a popular film that bowed without an out-of-town tryout. The creative team certainly instilled confidence. In addition to frequent Stephen Sondheim collaborate Lapine, fellow Pulitzer-winner Tom Kitt contributed the music and Tony Award nominee Michael Korie penned the lyrics. Always intended as a limited engagement, “Sunset” shuttered three weeks early, likely due to the upheaval caused by the Omicron variant.

When “Flying Over Sunset” opened it received overwhelmingly divided reviews from critics. In one of the positive notices, Marilyn Stasio (Variety) labeled the show “stylish,” a “thoughtful and unusually literate musical,” and a “delectable theatrical bonbon.” Of the cast and creatives, she noted the “luscious lighting” by Bradley King, commended the “superlatively sophisticated” Cusack, and singled out actor Robert Sella as writer George Heard. Stasio also admired the “uncommon musical grace” the show featured in its treatment of author Huxley, who was losing his eyesight but could momentarily see the world vibrantly while on LSD.

Jesse Green (New York Times) thought the show less inspired. He called the musical “sometimes mesmerizing” but “mostly bewildering.” He places most fault squarely with Lapine, from his vision for the work that led the musical “in some very strange and ultimately tiresome directions” and whose book featured an “overly programmatic quality” and “exceedingly flat dialogue.” Green also tore into some of the Act II numbers, calling one “incoherent,” another “mortifying,” and yet another “banal.” Despite his issues, Green appreciated the performances and design. He wrote Hadden-Paton “winningly portrays” Huxley, singled out Yazbeck’s “showstopping dance routine” choreographed by the “sublime” “tap phenom” Michelle Dorrance, cited Cusack’s “smart rendering” of Luce, and praised the “gorgeous technical wizardry” of the scenic, lighting, and costume designers.

At the other extreme, Helen Shaw (Vulture) deemed “Flying Over Sunset” “ill-conceived” and “dramaturgically inept,” a musical “lacking in connection, philosophy, or fire.” Though she thought the piece featured a “lush but dull” score and a “deadly second act,” even Shaw highlighted Cusack’s “dazzling” performance and claimed Yazbeck had the “best” moments, when his Grant danced with his younger self, played by Atticus Ware.

After such mixed responses – the majority of its reviews were lukewarm at best – “Flying Over Sunset” may have a challenging “trip” to the Tony Awards. The musical will compete with seven other new works for a nomination for the top prize of Best Musical, including the already-opened “Six,” “Girl From the North Country,” “Diana, The Musical,” and “Mrs. Doubtfire,” plus the upcoming “MJ The Musical,” “Paradise Square,” and “Mr. Saturday Night.” With eight contenders, there will only be four slots and with “Six” and “North Country” already looking strong, “Sunset” may get overlooked by the spring offerings if they’re better received. Should those remaining shows not live up to the nominators’ expectations, though, “Sunset” could surprise with a bid, a recognition of a brave, if flawed, new work in a tidal wave of existing intellectual property adaptations.

It seems much more likely, though, that certain standout aspects of “Sunset” will receive bids while the majority of the work goes unrewarded. Back in 2010, a similarly ambitious undertaking – a musical adaptation of Academy Award-winner Pedro Almodóvar’s “Women on the Verge of a Nervous Breakdown” – also opened on Broadway without a tryout and failed to win over critics. Even though the show missed that Best Musical bid, it still nabbed three Tony nominations for David Yazbek’s score and for featured actresses Patti LuPone and Laura Benanti.

The same could easily happen with “Sunset,” with this winsome cast earning Tony nominations. The main trio are all Tony nominees already: Cusack for musical “Bright Star” in 2016, Hadden-Paton for “My Fair Lady” in 2018, and Yazbeck for “On The Town” in 2015. While Cusack seemed to elicit the best notices, the Musical Actress category is especially overcrowded this season with all six “Six” performers eligible, plus category frontrunner Sharon D Clarke (“Caroline, or Change”), Katrina Lenk in the acclaimed new “Company,” and bows from Sutton Foster (“The Music Man”) and Beanie Feldstein (“Funny Girl”) forthcoming, too. Musical Actor will boast starry turns from Hugh Jackman (“The Music Man”) and Billy Crystal (“Mr. Saturday Night”), Myles Frost’s Michael Jackson, and Broadway favorite Rob McClure (“Mrs. Doubtfire”), which could complicate Haddon-Patton and Yazbeck’s paths to nominations.

In the other categories, look out for a quartet of potential contenders, including choreographer Michelle Dorrance, who made her Broadway debut with “Sunset;” Tony-winning scenic designer Beowulf Boritt, who has one trophy and two other nominations; three-time Tony-nominated costume designer Toni-Leslie James; and lighting designer Bradley King, who is batting a perfect thousand at the Tony Awards, with nominations and wins for musicals “Natasha, Pierre & The Great Comet of 1812” and “Hadestown.”