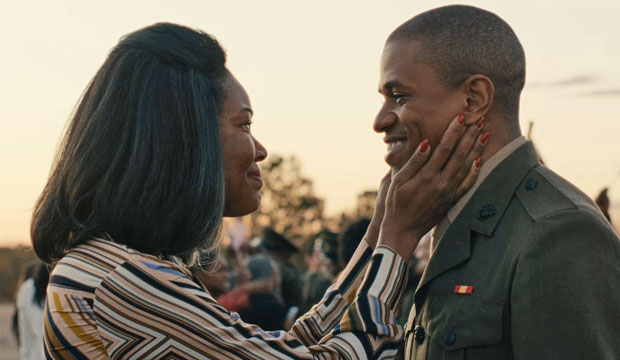 Gabrielle Union made her first big mark in film in the now iconic teen movie “Bring It On” over 20 years ago. Since then, she has been a successful working actress in both television and film. Now, she has turned in an exemplary performance in a new film, “The Inspection,” also starring Jeremy Pope. Will this be her Oscars moment?

“The Inspection” is a story of a young gay Black man with few choices in life, who is also rejected by his mother (Union). Her performance as Inez French has garnered some of the best reviews of her entire career. Lindsey Bahr (Associated Press) hails, “It is a staggeringly difficult role that Union masters despite just being in a handful of scenes that are the most powerful in the movie.” Gary Kramer (Philadelphia Gay News) adds that she “makes a strong impression during her few scenes … Union makes Inez a force as dominant as [drill sergeant] Laws in the film.” Richard Roeper (Chicago Sun-Times) says she’s “turning in what might be the finest work of her entire career.” Albeit appearing in only a few scenes, she delivers a performance worthy of awards attention.

SEEGabrielle Union (‘The Inspection’): ‘I just didn’t believe in myself enough to think I could pull it off’ [Exclusive Video Interview]

The Oscars Best Supporting Actress category is already crowded with a number of actresses in the conversation from “Women Talking,” “Everything Everywhere All At Once,” and “The Woman King,” to name a few. But Union has been recently nominated for both the Gotham Award and the Spirit Award for her portrayal. So she is quickly making a case to be a first-time nominee at the awards.

Union has a career that spans almost 30 years and has consistently worked over her long career, and this is the type of indie role that can finally land her in the awards conversation like previous Gotham and Spirit nominees Patricia Arquette (“Boyhood”), Yuh-jung Youn (“Minari”), and Jessie Buckley (“The Lost Daughter”), to name a few. Will Union be the next to break through at the Oscars with an awards-worthy indie performance?