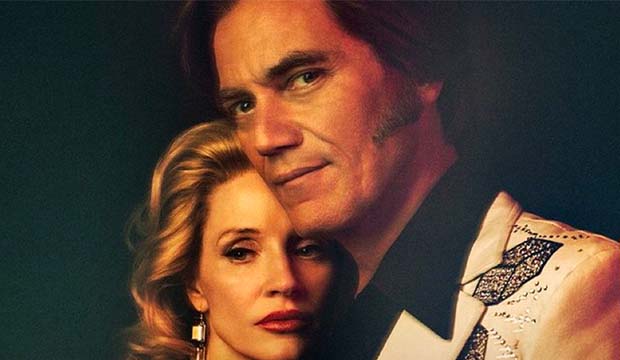 Over the years, there have been many iconic country duos but none quite like George Jones and Tammy Wynette. The couple had a storied history of chart-topping hits, as well as a complicated personal life. In Showtime’s new limited series, “George and Tammy,” Oscar winner Jessica Chastain and Oscar nominee Michael Shannon embody these legends complete with their own singing. Critics are praising the stars in this drama-fueled acting showcase to the tune of a certified freshness rating of 82% on Rotten Tomatoes.

Samantha Coley of Collider begins by stating that this series is “a phenomenal piece of television that manages to succinctly tell a comprehensive version of this heartbreaking true story in just six episodes.” Adding, “The series is based on the book ‘The Three of Us: Growing Up With Tammy and George’ written by their daughter Georgette Jones, who also serves as a consulting producer.” Coley continues, “And in spite of the devastating reality of how their story ends, George & Tammy plays upon your emotions in such a way that you wish for this version of their lives to come to a happily ever after. Their duet rendition of Jones’ ‘Why, Baby, Why?’ will no doubt be sneaking onto next year’s Spotify Wrapped playlists.”

Matt Roush of TV Insider makes the astute observation that the many clichéd aspects of country songs were indeed part of the real lives of the country stars. “You’d expect actors of this caliber to bring emotional authenticity to their scenes of high passion, violent conflict, and deep regret, and indeed they deliver. But you’re likely to be even more blown away by how convincingly and ardently they provide their own vocals. (Seriously, is there anything Chastain, a recent Oscar winner as Tammy Faye Bakker, can’t do?)” As her star rose, Jones’ began to wane. “Tammy’s a rocket … You’re just along for the ride. But what a ride it was, while it lasted.”

Nick Allen of RogerEbert.com draws comparisons to “A Star Is Born” as well adding, “The whole of it is enlivened by incredible work from Jessica Chastain and Michael Shannon, who exchange show-stopping singing moments and come packaged with a strong sense of passion, along with a knowing, exciting taste for sincere kitsch.” Allen adds, “But now they have soaring songs to complement their dramatic work, as when we see Chastain belt out the highest notes of Wynette’s hit, ‘Stand By Your Man,’ even though George’s behavior has professionally screwed her over again. And the scene when Shannon’s much older Jones records future mega-hit ‘He Stopped Loving Her Today,’ with a weary Tammy watching him just beyond the glass of the recording booth, is heartbreaking and gorgeous.”

Kristen Reid of Paste Magazine praises the series for digging deep into the real life story with the upmost respect. “Chastain and Shannon only scratch the surface of Wynette and Jones’ magnetic connection, but for a little while that’s enough to propel the series.” Chastain delivers vocally, but “it’s impossible to come close to Tammy’s singular voice, the resonating love and pain that emanated from every note she sang.” Reid continues, “Just years before her death—and 20 years into her horrific marriage to George Richey—Tammy and George reunited on tour, despite Wynette’s rapidly declining health. According to Jones, those last years gave them a chance to salvage their friendship. Not every story has a happy ending, but barreling through these critical final moments diminishes the heart of the entire series, the undeniable pull George Jones and Tammy Wynette had towards each other, and the lasting quality that makes their records so mesmerizing 40 years later.”