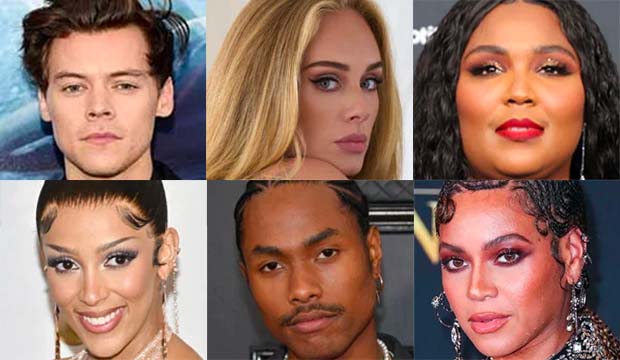 Billboard has released their year-end charts for 2022 and Glass Animals‘ “Heat Waves” tops the Hot 100 singles. Released in 2020, the song enjoyed the longest journey to the top spot in Billboard history: 59 weeks. At 91 weeks, it is the longest charting song on the Hot 100 of all time, surpassing “Blinding Lights” by The Weeknd. But how did this year’s Record of the Year Grammy nominees fare?

SEE Will the Grammys do something ‘Unholy’ for Best Pop Duo/Group Performance?

Of this year’s contenders, “As It Was” by Harry Styles came out on top as the #2 song of the year. It topped the charts for 15 weeks, marking the longest-running #1 song by a UK act and the fourth overall in history. Not far behind was “Easy On Me” from Adele at #4. The lead single from her fourth disc, “30,” the song spent 10 weeks atop the chart, the longest of any female artist in the 2020s.

Lizzo‘s “About Damn Time” comes in third place with a 12th-place rank on the year-end chart. Released April 14, 2022, the single became the singer’s second #1 hit and stayed on top for two weeks. Next is “Woman” by Doja Cat, which finished out the year at #21. The song lingered for several months on the charts before climbing to #7 on the Hot 100 nearly a year after it debuted. Steve Lacy rounds out the top five on this list with “Bad Habit” landing him at #28. The second single from “Gemini Rights” was his first chart entry in the U.S. and peaked at #1 on the Hot 100. It was the first song to top the Hot R&B/Hip-Hop Songs, Hot R&B Songs and Hot Rock & Alternative Songs charts simultaneously

Further down the chart is Beyoncé, whose “Break My Soul” finished out the year at #38. Released in June as the lead single of her seventh studio album, “Renaissance,” it samples Big Freedia‘s 2014 track “Explode.” It topped the Hot 100, Hot Dance/Electronic Songs and Hot R&B/Hip-Hop Songs charts.

“Don’t Shut Me Down” by ABBA, “Good Morning Gorgeous” by Mary J. Blige, “The Heart Part 5” by Kendrick Lamar and “You and Me on the Rock” by Brandi Carlile did not have the cross-over chart success to land among the year’s 100 most successful singles.

If you’re wondering if the overall chart success corresponds to winning Record of the Year, the answer is, not really. Last year’s top ranking nominee was the year-end #6 single “Kiss Me More” by Doja Cat and SZA. It was edged out by “Leave the Door Open” by Silk Sonic, which finished out 2021 just one slot behind it at #7. 2021’s Record of the Year was “Everything I Wanted” by Billie Eilish. It was #18 on the year-end Hot 100 Songs for 2020, behind competitors “Circles” by Post Malone (#2), “Don’t Start Now” by Dua Lipa (#4), “Rockstar” by DaBaby featuring Roddy Ricch, “Say So” by Doja Cat (#11) and “Savage” by Megan Thee Stallion featuring Beyoncé (#15).

PREDICTthe Grammys now; change as often as you like until winners are announced on February 5Make your predictions at Gold Derby now. Download our free and easy app for Apple/iPhone devices or Android (Google Play) to compete against legions of other fans plus our experts and editors for best prediction accuracy scores. See our latest prediction champs. Can you top our esteemed leaderboards next? Always remember to keep your predictions updated because they impact our latest racetrack odds, which terrify record executives and music stars. Don’t miss the fun. Speak up and share your huffy opinions in our famous forums where thousands of showbiz leaders lurk every day to track latest awards buzz. Everybody wants to know: What do you think? Who do you predict and why?