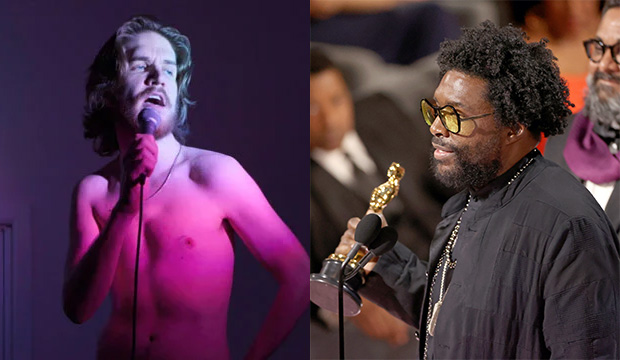 Netflix and Christopher Polk for Variety

Just one week after winning the Oscar for Best Documentary Feature, “Summer of Soul” is now in the hunt to add a Grammy to its ever-growing awards collection. It competes in the category of Best Music Film against fellow Grammy nominees “Bo Burnham: Inside,” Billie Eilish‘s “Happier Than Ever: A Love Letter To Los Angeles,” David Byrne‘s “American Utopia” and Jimi Hendrix‘s “Music, Money, Madness … Jimi Hendrix In Maui.” According to Gold Derby’s racetrack odds, “Summer of Soul” is the front-runner to prevail at the 2022 Grammys, but Burnham is hot on its heels.

“Summer of Soul’s” Grammy-nominated producers are the same as those who just took home the Academy Award: Ahmir “Questlove” Thompson, Joseph Patel, Robert Fyvolent and David Dinerstein. “This is such a stunning moment for me right now,” Questlove said at the Oscar podium last Sunday (watch below). “But this is not about me. This is about marginalized people in Harlem that needed to heal from pain.”

SEEHarry’s back! Harry Styles announces his 3rd solo album, ‘Harry’s House,’ and when it’ll be released

In the lead-up to the Oscars, “Summer of Soul” also claimed precursor prizes at the BAFTAs, PGA Awards, Critics Choice Documentary Awards, Film Independent Spirit Awards and various critics’ groups. The Searchlight Pictures/Hulu documentary chronicles the 1969 Harlem Cultural Festival via footage and performances that had been locked away in a basement for five decades.

“Bo Burnham: Inside” streamed on Netflix last May and tells the story of a man (Burnham) quarantining in his house during Covid-19. The special, which has an enormous online fan base, features a variety of songs and sketches about his day-to-day life and mental health. It won three of its six Creative Arts Emmys last year (music direction, writing and directing) and recently claimed the Critics Choice Award for Best Comedy Special. Performer/director Burnham and producer Josh Senior would both claim Grammys if the project prevails.

As for the other nominees, Eilish (the reigning Oscar winner for “No Time to Die”) would personally win a Grammy for “Happier Than Ever: A Love Letter To Los Angeles” alongside her directors and producers. Byrne (a one-time Grammy winner) is eligible for “American Utopia” along with his director and co-producer, Spike Lee. As for the late Hendrix (who never won a Grammy in his lifetime), he would not earn a posthumous award if “Music, Money, Madness” claimed victory.

The Grammy Award for Best Music Film has a rich history of anointing movies about some of the industry’s biggest superstars. Linda Ronstadt‘s “The Sound of My Voice” prevailed last year and Beyonce‘s “Homecoming” scored in 2020. Other Grammy winners in this visual media category include films about the lives of Quincy Jones, The Beatles, Amy Winehouse, Foo Fighters, Bruce Springsteen and Bob Dylan. Of note, Madonna and Sting have each won this category twice.