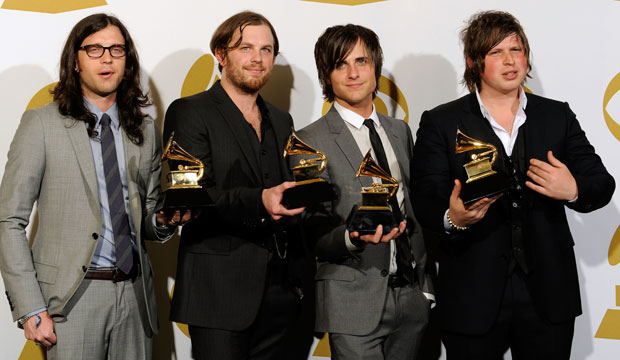 Many great songs have won Record of the Year at the Grammys and gone on to become substantial classics. Songs like Mark Ronson and Bruno Mars‘s “Uptown Funk!,” Billie Eilish‘s “Bad Guy,” and Adele‘s “Rolling in the Deep” are still very much relevant in our culture today. However, I’d argue that one of the most underrated wins in recent years was that of Kings of Leon’s “Use Somebody,” which took home the important prize at the 2010 Grammys. “Use Somebody” was certainly not the biggest hit out of its class, which makes its victory even more impressive and interesting. So in a year with bona fide classics from The Black Eyed Peas, Beyoncé, Taylor Swift, and Lady Gaga, how did the alt rock band manage to win?

“Use Somebody” was Kings of Leon’s biggest hit and, to many who weren’t familiar with them beforehand, their breakthrough. The band had had a minor hit prior with “Sex on Fire,” which actually won them a Grammy the year before their big Record of the Year victory. Before “Use Somebody,” Kings of Leon were a buzzy rock band making waves with that genre’s audience, but not so much outside of it. However, this song quickly changed that. “Use Somebody” became a smash hit, peaking atop the Pop Airplay, Alternative Airplay, Adult Top 40 Airplay, and Triple A charts, and reaching number-four on the Hot 100. It’s also a typical Grammy-friendly song: a sentimental rock ballad about longing for somebody special.

With all that success, you’d think the song would be a predictable Grammy winner; that’s until you see the rest of the nominations. Lady Gaga’s number-one smash “Poker Face” was nominated, as was one of Beyoncé’s most iconic hits, “Halo.” Also nominated was “I Got a Feeling” by the Black Eyed Peas, the biggest hit of the year. Finally, that year’s ultimate Album of the Year winner Swift rounded out the category with “You Belong with Me.” With such a competitive lineup, Kings of Leon weren’t safe bets at all. Predictably, there wasn’t a clear consensus on who was going to win: Spin went with Swift, Billboard went with Gaga, and Pink — yes, the Pink — predicted “Use Somebody” in a very of-its-time Rolling Stone article where artists predicted the winners. Point is, it was truly anybody’s game.

Perhaps what sticks out the most about “Use Somebody’s” win is the fact that it managed to take Record of the Year but lost Song of the Year to Beyoncé, who was also nominated in both categories. Granted, Beyoncé was competing with “Halo” for Record while winning for “Single Ladies” in Song, but it’s still rare for that kind of split to happen. Consider how Bruno Mars won both in 2018 despite submitting different songs for Record (“24K Magic”) and Song (“That’s What I Like”). Perhaps the absence of “I Got A Feeling” in Song of the Year helped Beyoncé sway more of the urban and pop vote her way, while in Record, the overload of four pop songs could’ve split enough votes to help the sole rock nominee win. It also likely helped Kings of Leon that their song was still pop-friendly enough not to be limited to rock voters.

If the lineup had been less pop-heavy, perhaps another track would’ve picked up the award. But in a lineup with four big pop stars, “Use Somebody” managed to get just enough votes from its strong rock voting bloc to manage an upset. The win also teaches us that your song doesn’t have to be the biggest hit to prevail, something further proved by winners like Robert Plant and Alison Krauss‘s “Please Read the Letter” and Billie Eilish’s “Everything I Wanted.” Oh, and that Pink is actually a pretty good Grammy predictor too.