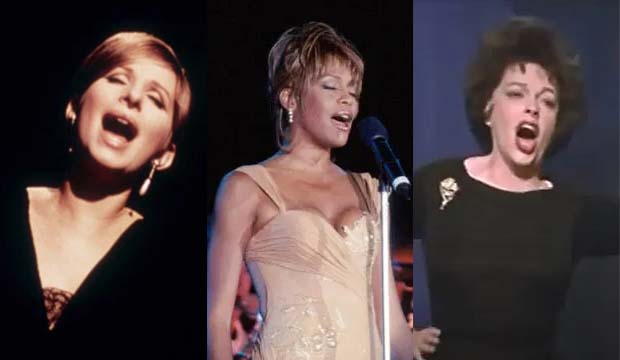 In a recent poll we asked our readers to vote for the greatest female singer of all time. Thousands voted and named Barbra Streisand, Whitney Houston and Judy Garland the top songbirds ever. Streisand took the crown with 30% of the tally, followed by Houston with 21% and Garland at 18%. These three pristine legends were far above the rest of the field.

Rounding out the Top 10 in our poll were Lady Gaga, Aretha Franklin, Ella Fitzgerald, Mariah Carey, Celine Dion, Adele and Kelly Clarkson. Each of them had over 100 votes, but didn’t come close to the thousands cast for our top three. Votes came in from an astounding 101 countries, proving worldwide fandom for these divas.

Streisand has dozens of gold and platinum-selling albums and is regarded as one of the top-selling female artists of all time. The “People” singer has had number one albums in each of the last six decades—the greatest longevity for any solo recording artist. According to Billboard, she is second in the all-time charts, exceeded by only Elvis Presley.

After establishing her music career in the 1960s, Streisand ventured into film by the end of the decade. She starred in the critically acclaimed “Funny Girl” (1968), for which she won the Academy Award for Best Actress. In “A Star Is Born” (1976) she took home her second Academy Award, composing music for the love theme “Evergreen.” With the release of “Yentl” (1983), Streisand became the first woman to write, produce, direct, and star in a major studio film. That picture won an Oscar for Best Score and a Golden Globe for Best Motion Picture Musical. Streisand also received the Golden Globe Award for Best Director, becoming the first woman to do so.

Streisand has sold over 150 million records worldwide. According to the Recording Industry Association of America (RIAA), she is the second highest-certified female artist in the United States, with 68.5 million certified album units, trailing only Mariah Carey. Billboard honored Streisand as the greatest Billboard 200 female artist of all time. Her accolades include two Oscars, 10 Grammy Awards (including the Grammy Lifetime Achievement Award and the Grammy Legend Award), five Emmys, four Peabody Awards, the Presidential Medal of Freedom and a Kennedy Center Honor.

Houston is nicknamed “The Voice” and has been prized with numerous awards and accolades for her worldwide success in both the music and movie industries. Her awards include one Emmy, six Grammys (including Record and Album of the year wins), two Grammy Hall of Fame honors, 14 World Music Awards, 16 Billboard Music Awards, 22 American Music Awards and 28 entries into the Guinness World Records. The “I Will Always Love You” singer was inducted into the Rhythm and Blues Music Hall of Fame in 2014 and the Rock and Roll Hall of Fame in 2020.

Garland received numerous awards and honors throughout her 40-year career. The “Wizard of Oz” actress was generously recognized for her work in film, television, music and stage. She earned two Oscar nominations (“A Star is Born” and “Judgment at Nuremberg”) and was awarded a special Academy Juvenile Award in 1940. She was nominated for three Emmys, including one for “The Judy Garland Show” in 1964. The legendary diva received a special Tony Award for her record-breaking concert run at New York City’s Palace Theatre. Garland also took home two Grammys for her concert album “Judy at Carnegie Hall.”

Garland has also received a number of posthumous awards and honors. She was the recipient of a Grammy Lifetime Achievement Award, and several of her recordings have been inducted into the Grammy Hall of Fame. The songstress has twice been honored on United States postage stamps, and has two stars on the Hollywood Walk of Fame. The American Film Institute has repeatedly recognized her talent, placing Garland eighth on its list of the top 100 female stars of all time and placing five of her recordings in its list of the 100 best songs from films, including “Over the Rainbow” at number one.

Elvis Presley: What was his greatest song, and why do you think so?

Judy Garland tribute: 'When she sang a song, she lived it'

Judy Garland strikes just the right note in 'The Clock'

Lisa Marie Presley loves Baz Luhrmann's 'Elvis,' and says she will eat her own foot if Austin Butler…