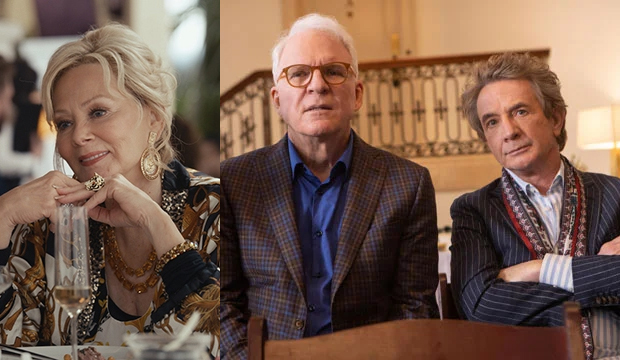 Currently at Gold Derby, the majority of our Critics Choice Awards Experts think “Ted Lasso” will win Best Comedy Series for the second year in a row. The Apple TV+ comedy is also coming off major victories at the Primetime Emmys, winning for series and three actors (Jason Sudeikis, Hannah Waddingham and Brett Goldstein). However, one pundit (Christopher Rosen of Gold Derby) predicts “Hacks” will win at Critics Choice, while another (Eric Deggans of NPR) thinks “Only Murders in the Building” will prevail. Could either of these laffers pull off an awards upset?

HBO Max’s “Hacks” stars Jean Smart as Deborah Vance, a legendary stand-up comedian who currently stars in her own Las Vegas show. When her career begins to stall, her agent hires an up-and-coming young writer named Ava Daniels (Critics Choice nominee Hannah Einbinder) to help her rekindle her comedy magic. The series claimed three trophies at the recent Emmys for actress, writing and directing, which makes it a big threat to take down the critics’ front-runner, “Ted Lasso.”

Hulu’s “Only Murders in the Building” is the latest project to reunite comedy legends Steve Martin and Martin Short, and now both have received Critics Choice nominations for Best Comedy Actor. They’re joined over in the Best Comedy Actress race by Selena Gomez. The quirky series tells the story of three crime podcast aficionados who become involved in solving a murder investigation at their own apartment building.

Remember, just last year Apple’s “Ted Lasso” defied the odds at the Critics Choice Awards when it took down front-runner “Schitt’s Creek.” That Pop comedy was competing for its final season and had already claimed prizes at the Emmys and Golden Globes, but the critics decided to go their own way. Now, Season 2 of “Ted Lasso” has earned a total of four nominations: comedy series, lead actor (Sudeikis), supporting actress (Waddingham) and supporting actor (Brett Goldstein).

None of the other Best Comedy Series nominees — “The Great” (Hulu), “Insecure” (HBO), “The Other Two” (HBO Max), “Reservation Dogs” (FX on Hulu) or “What We Do in the Shadows” (FX) — have support from our Critics Choice Awards Experts. Are our pundits underestimating these popular shows? Or will the winner indeed be “Ted Lasso,” “Hacks” or “Only Murders in the Building”?