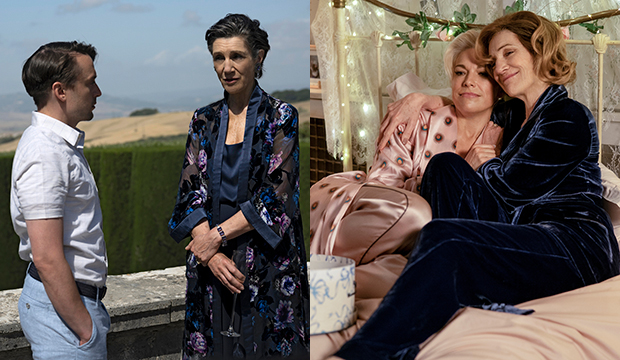 The only thing better than receiving one Emmy nomination is receiving two Emmy nominations. But earning multiple bids in the same year as a performer is not as uncommon as one might think, especially with television moving toward shorter seasons and limited series still rising in popularity. This has allowed actors to appear in more projects throughout the year, giving them additional chances to be recognized. But there’s another reason it happens too: guest appearances.

So far, 10 performers have been nominated in both the drama and comedy guest categories in the same year. The first to do it was Jack Gilford, who in 1989 was nominated for his work on the comedy “The Golden Girls” and the drama “thirtysomething.” He was followed in 1991 by Colleen Dewhurst, who was nominated for her appearances on “Murphy Brown” and “Road to Avonlea,” winning for the former. In 1993, Gwen Verdon was nominated for her turns on “Dream On” and “Homicide: Life on the Street,” while Marlee Matlin kept it going the following year, picking up noms for her work on “Seinfeld” and “Picket Fences.”

There wasn’t another double guest nominee until 2001, when Jean Smart was recognized for her guest appearances on “Frasier” and “The District”; she won for the former. Then, in 2005, Cloris Leachman, who is the most recognized actress in the guest comedy category with eight nominations over her long career, received bids for her work on “Malcolm in the Middle” and “Joan of Arcadia.” After a brief lull, Michael J. Fox and Nathan Lane went back to back in 2012 and 2013, both earning drama guest actor noms for their work on “The Good Wife.” On the comedy side, Fox was recognized for “Curb Your Enthusiasm” while Lane was nominated for his work on “Modern Family” (thanks to his nomination this year for “Only Murders in the Building,” Lane is also now the most nominated actor in the guest comedy category). Then, in 2016, Laurie Metcalf earned guest actress nominations for “The Big Bang Theory” and “Horace and Pete” (this was in addition to a nomination for Best Comedy Actress for “Getting On”).

This year, Dame Harriet Walter joined the small but mighty list, becoming the 10th person to earn double guest nominations in the same year. She’s recognized for her work on the HBO family drama “Succession,” in which she plays Lady Caroline Collingwood, the mother of Kendall (Jeremy Strong), Shiv (Sarah Snook) and Roman Roy (Kieran Culkin). On the comedy side, she is nominated for her turn on Apple TV+’s soccer-themed show “Ted Lasso,” on which she plays Deborah, the mother of Hannah Waddingham’s Rebecca Welton.

If Walter wins both awards, she’ll be the first person in Emmy history to sweep the guest categories in the same year. Currently, she’s predicted to snag at least one of them. She’s leading the drama guest actress field, with 7/2 odds and three Experts and six Editors predicting her to triumph. She leads Lee Yoo-mi (“Squid Game”), Martha Kelly (“Euphoria”), Marcia Gay Harden (“The Morning Show”), and Hope Davis and Sanaa Lathan, both also of “Succession.” Luckily for Walter, vote-splitting likely won’t be a big factor here, because neither Davis nor Lathan had much to do in Season 3 and mostly got swept up with the rest of the large cast as voters went down the unlimited ballot.

But if Walter seems to have the drama side locked down, comedy is proving to be a bit harder. Currently, the British actress sits in fourth place behind Jane Lynch (“Only Murders in the Building”), Laurie Metcalf (“Hacks”) and Harriet Sansom Harris (“Hacks”). Two more “Hacks” actresses — Jane Adams and Kaitlin Olson — round out the category. Vote-splitting could actually benefit Walter here, but it would still leave her to contend with Lynch, a five-time Emmy winner who gave a memorable performance as the hilarious stunt double of Steve Martin’s character, a former actor, on the Hulu murder mystery.

The fact that Walter also seems to be a lock for drama could mean Emmy voters will want to look elsewhere when voting for Best Comedy Guest Actress. And yet, it’s also hard to deny the allure of “Ted Lasso,” which remains exceptionally popular and earned 20 nominations this year, including Best Comedy Series and 10 acting bids. So while the comedy odds don’t currently appear to be in Walter’s favor, only a fool would ignore the hold the Apple series still has over Emmy voters. History could still be made.

Emmy odds for Best Drama Guest Actress
Who will win?