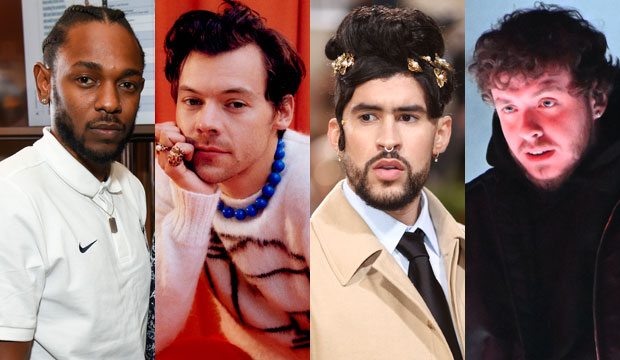 While 2022 had been somewhat slow for releases, the month of May truly gave us some big records. Previous Grammy winners like Harry Styles, Bad Bunny, and Kendrick Lamar all released long-awaited albums, while Grammy nominee Jack Harlow also put out his sophomore record. With all these names being big hit-makers on the Grammy’s radar, how will these releases fare come nominations day this fall?

Perhaps the biggest release of the year so far is Styles’s “Harry’s House.” The record debuted with the biggest sales figures of the year so far, moving over 500,000 units in its first week. Styles’s “As It Was” was already a pretty safe contender for Record and Song of the Year, as well as Best Pop Solo Performance, but now the album has solidified its place in the Album of the Year race. What many might wonder, though, is if Styles can go all the way to win the top category this year, especially if he holds up his momentum, which hasn’t really been the case with Grammy favorites in the running this year like Silk Sonic and Adele, whose albums have drifted down the charts since their debuts last November; as of this writing, Styles’s last album, “Fine Line” was charting about 70 spots higher than “An Evening with Silk Sonic” and Adele’s “30.” But even if a general field win were out of the question, Styles could get his due in the pop field, where he is already a winner, especially after multiple years of splits between the pop field and the general field.

Another big release in May was Bad Bunny’s “Un Verano Sin Ti.” The summer record has rocked charts all over the world, including the United States, and is for sure getting into Best Latin Urban Album. However, one has to wonder if the Grammys will finally acknowledge what a massive phenomenon Bad Bunny is and nominate him for one of the big awards. With a relatively slow year outside of some Grammy favorites, “Un Verano Sin Ti” could make history with an Album of the Year nomination, especially since it’s holding up very well so far in the weeks after its debut despite being an all-Spanish release. Bad Bunny is also probably a known name to a lot of voters even if they’re not among the academy’s Latin contingent, and I’m sure a lot of them know about the album’s success and might feel inclined to cast their vote for it. But even if it’s just Latin voters, could overwhelming turnout from this set get Bad Bunny his first Album of the Year nom anyway?

Much like Bad Bunny, Harlow released “Come Home the Kids Miss You” at the beginning of May. While his album did suffer a lot of critical backlash, it still did some decent numbers and has the smash number-one hit “First Class,” which has spent three weeks atop the Hot 100. “Come Home” could easily ride the wave of its smash single to a big general field nominations haul, but even if it doesn’t, it is still probably in for the rap field. “First Class,” on the other hand, could max out on noms if voters are feeling it as much as the general public has been.

Another rapper in the May release cycle was Lamar, who debuted “Mr. Morale and The Big Steppers” to both commercial and critical success. While it might not feel as quintessential as the rapper’s previous two records, Lamar has built a very strong following inside the Recording Academy, earning 14 Grammys and sweeping rap categories with his records “To Pimp A Butterfly” and “Damn.” As such, you can expect nominations for Lamar across the board, especially in the rap field. “N95” is a likely bet for Record and Song of the Year, although its legs will tell how likely it is. The album will probably get into Album of the Year as well, as perhaps the only rap record to do so this year.

A couple of artists released singles in May as well. Lady Gaga’s “Hold My Hand”; Post Malone and Roddy Ricch’s “Cooped Up”; and Calvin Harris, Dua Lipa, and Young Thug’s “Potion” could all get nominations in their respective genres, and maybe even cross over to the general field.