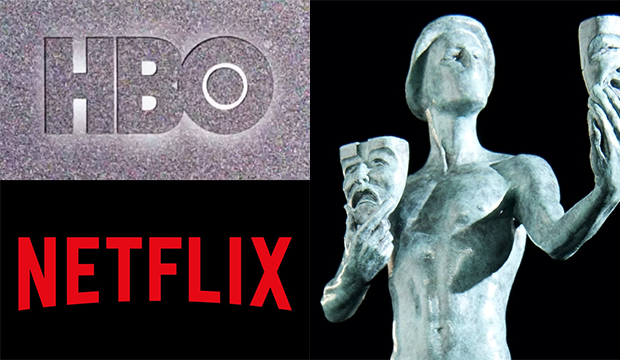 HBO came out victorious on the morning of Wednesday, January 12 when the 2022 SAG Awards TV nominations were announced. The premium paycaster and its on demand partner, HBO Max, combined to earn a leading 14 noms across five different shows (“Succession,” “Mare of Easttown,” “Hacks,” “The White Lotus” and “Scenes from a Marriage”). Next in line was Netflix, with 10 total bids across six series (“Squid Game,” “The Kominsky Method,” “The Chair,” “Cobra Kai,” “Halston” and “Maid”). Scroll down for the SAG nomination network scorecard for 2022.

Apple TV+ received nine notices thanks to the success of two programs (“Ted Lasso” and “The Morning Show”). Hulu followed with eight citations spread out over four shows (“Only Murders in the Building,” “The Great,” “The Handmaid’s Tale” and “Dopesick”). Disney+ scored a pair noms (“The Falcon and the Winter Soldier” and “Loki”). The nominations list was rounded out by Nat Geo (“Genius: Aretha”) and Paramount Network (“Yellowstone”).

In a telling sign of the times, none of the Big Four broadcast networks (ABC, CBS, Fox, NBC) received any love this year. That marks the first time in the SAG Awards’ 28-year history they’ve all been shut out.

The 2022 ceremony will air February 27 on TNT/TBS from the Barker Hangar in Santa Monica, California. Helen Mirren will receive the Life Achievement Award.

Here is the network scorecard for the 2022 SAG Awards TV nominations:

“Scenes from a Marriage”
Movie/Limited Actor for Oscar Isaac

“The Falcon and the Winter Soldier”
Stunt Ensemble