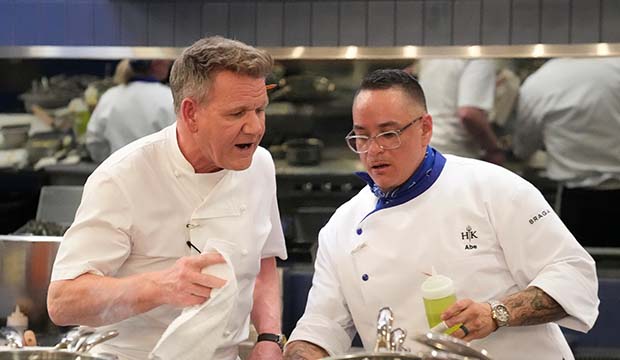 Tonight, both teams are put to the test as each contestant has to make their best chicken wings and then take on their first dinner service. VIP guests include legendary singer Gene Simmons (KISS) and singer/actress Jojo. Follow along with our live blog below.

“Hell’s Kitchen” returns for its 21st season, with Chef Gordon Ramsay back in Los Angeles. For the first time ever, the well-seasoned 40-somethings will take on the fresh up-and-coming 20-somethings in a battle of the ages. These 18 all-new chef-testants enter the kitchen, with Christina Wilson and Jason “Jay” Santos returning as sous-chefs for the Red Team and Blue Team, respectively. At stake for the winner? A $250,000 cash prize and the head chef position at Gordon’s brand new Hell’s Kitchen Caesar’s Atlantic City.

Below, read our minute-by-minute “Hell’s Kitchen: Battle of the Ages” recap of Season 21, Episode 2, titled “Just Wingin’ It,” to find out what happened Thursday, October 6 at 8:00 p.m. ET/PT. Then be sure to sound off in the comments section about your favorite aspiring chefs on Fox’s reality TV show and who you think has what it takes to join the “HK” winners list.

8:00 p.m. — “Previously on ‘Hell’s Kitchen’!” In the season premiere, 18 all-new chef-testants entered the kitchen. Gordon split them into teams based on age and the “Battle of the Ages” began. Next, each chef prepared their signature dish and Sakari’s oyster stew won it for the Red Team. Over on the Blue Team, Nicole scored a 1 for using boxed pasta. Yikes! Despite the Blue Team’s loss, nobody was eliminated.

8:05 p.m. — Things pick up where last week left off — an elevated chicken wing contest. Their 40-minute time limit starts now and the loser will be eliminated. Things get frantic in the kitchen, but the Red Team notices that Ileana is particularly frazzled. Time winds down and it’s time for Gordon to judge these wings.

8:08 p.m. — Gordon reminds everyone that two punishment passes are at stake. This allows the holder to switch places with someone on the winning team, taking their reward in exchange for a punishment. One person from each team will win a punishment pass. But first, Christina and Jay choose the top three wings from their respective teams. Gordon will then taste all six and decide who has the best wings on the Blue Team and who has the best wings on the Red Team.

8:10 p.m. — Jay sends Zeus forward to represent the Blue Team first. Gordon loves his sweet chili wing and Zeus says, “This old guy is here to play!” The second chef-testant from the Blue Team is Alex who made a play on General Tso’s chicken. Gordon quickly says they’re even better than Zeus’, so Alex is out front! The third Blue Team member in contention is Nicole, who now has redemption from last week. Although it’s good, it’s not the best and Alex wins the punishment pass.

8:15 p.m. — The first member of the Red Team selected by Christina is Vlad. His wings are buttermilk soaked and covered in corn flakes. Gordon thinks it’s “delicious.” Christina’s second choice is Cheyenne, whose Asian barbecue wings have overtaken Vlad. Last up is Alejandro with a double-fried dry rub wing. Gordon awards the punishment pass to Alejandro! But with great power comes great responsibility. Gordon commands Alejandro and Alex to taste each of their teammate’s wings and tell him who the two weakest chefs are. This is a great way to make some enemies!

8:20 p.m. — Alejandro names Ileana and Dafne as the Red Team’s weakest. Alex names O’Shay and Billy as the worst for the Blue Team. Dafne’s wings were ambitious, but they lack flavor and seasoning. Ileana’s chicken was undercooked. Billy’s wings were overcooked and Alex didn’t understand the flavor profile. O’Shay’s plating is poor and the chicken is raw. Gordon sends Billy and Dafne back to safety. Then he saves O’Shay, telling Ileana to turn in her apron before Hell’s Kitchen even opens. The young chef protests, and actually convinces Gordon to give her another shot! Ileana insists she has great leadership skills and Gordon agrees he’ll give her “one more chance.”

8:30 p.m. — Jay and Christina give both teams instructions on how to cook the menu from Hell’s Kitchen. Neither team looks confident and considering it’s their first dinner service, I’m not surprised. As both teams prep their kitchens, Ileana struggles to get on the good side of her 20-something teammates. They’ll have to get along if they want to succeed. Hell’s Kitchen opens its doors and the restaurant is PACKED. KISS legend Gene Simmons will be dining in the Blue kitchen while pop star Jojo will be eating in the Red Team’s dining room.

8:35 p.m. — Orders begin flowing in and already Ileana and her teammate Alyssa are clashing. Meanwhile, over on the Blue Team Zeus’ pasta looks like scrambled eggs. Gordon is furious. He calls it “salty as f*** scrambled eggs” and says the great white shark that bit Zeus must have eaten half of his brain. Brutal! On the Red Team, Ileana and Alyssa are fighting so loudly that Gordon has to scream orders out over them. Send both home now! It’s Day 2 and neither of these two understand conflict resolution or personal boundaries. Where are Ileana’s leadership skills she boasted about earlier?

8:45 p.m. — Communication is a disaster on the Blue Team and when Gordon realizes a chicken order hasn’t even begun to be cooked he calls the entire team into the pantry. “How can we be this bad?” he screams. Charlene is overwhelmed by all the tempers flaring and I’m not sure she has what it takes to work with someone like Gordon. After sending up a few cold Wellingtons and raw chicken, Gordon tells the Blue Team to kiss his “f***ing ass,” head up to the dorms and pick two people who don’t deserve to be there.

8:55 p.m. — The Blue team is tired, humiliated and sore. But while they sulk, the Red Team pushes out entrees. Ileana has finally stepped up at the fish station and Jojo is loving her meal. Upstairs, the Blue Team sits around a table to debate who should be up for elimination. Zeus messed up the pasta while Billy and Charlene failed at the meat station. The group decides Charlene will go up for sure and the other spot is between Billy and Zeus. Billy starts to lose his mind and feels like he’s being railroaded.

9:02 p.m. — It’s time for the elimination. The Blue Team’s first nominee is Charlene. The second nominee is Billy. Both failed the at the meat station with serious inaccuracies. Billy says he has passion, he loves what he does and he’s there to win. Charlene admits she didn’t use her voice tonight and apologizes for not being at her best. As Gordon is about to make his decision, Zeus raises his hand and offers himself on the chopping block. Zeus says Charlene and Billy want it more than he does. Gordon doesn’t like being told what to do so he orders Zeus back in line along with Billy. Charlene turns over her jacket and becomes the first chef-testant eliminated. But Gordon isn’t done! He calls Zeus forward and says, “If you are willing to give up your spot so easily, you do not deserve to be here.” 16 chefs remain in the competition. “Charlene had trouble with her chicken and Zeus was nothing but a chicken,” Gordon said in the closing moments. “Good riddance.”