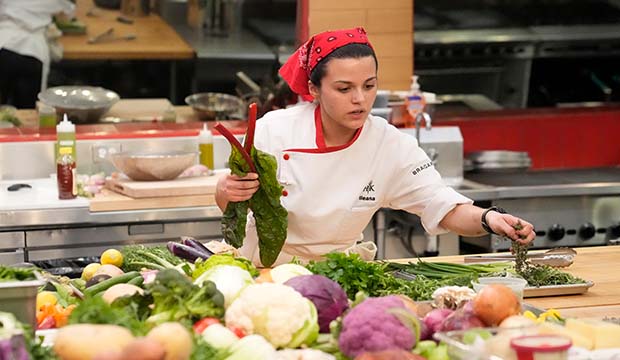 Tonight, the chefs step up to compete one-on-one in an ingredient game show. Contestants who win can either choose the fate of that ingredient or sabotage the other team. James Beard Award-winning chefs of “Jon & Vinny’s” John Shook and Vinny Dotolo join Gordon Ramsay in the dining room to taste the final dishes in the all-new “Game On!” episode of Hell’s Kitchen airing Thursday, December 1 (8:00-9:02 PM ET/PT) on FOX.

Below, read our minute-by-minute “Hell’s Kitchen: Battle of the Ages” recap of Season 21, Episode 8, titled “Game On!” to find out what happened Thursday, December 1 at 8:00 p.m. ET/PT. Then be sure to sound off in the comments section about your favorite aspiring chefs on Fox’s reality TV show and who you think has what it takes to join the “HK” winners list. See which contestants are still competing below.

8:00 p.m. — “Previously on ‘Hell’s Kitchen’!” In Episode 7, chefs were put to the test when Gordon and special guest, James Beard Award Winner Stephanie Izard, challenged them to make the perfect dish with obscure ingredients….only in a wok. The Red Team won 4-2 and Alejandro opted to steal Sommer’s reward, setting off fireworks between her and Abe. Following dinner service, Gordon chopped Mindy Livengood, stating, “Mindy had the guts to get her this far, but I had to go with my gut and cut her loose.”

8:10 p.m. — Tara is upset that Mindy has left the competition and she’s the only 40-something left on the Red Team. She calls her all-female team “catty bitches” and feels like it is now her against the world. The next morning Gordon calls everyone to the dining room for their next challenge. It’s a game show! Members of each team will step up to compete for ingredients — either opting to keep an ingredient or send it to the other time. First up, Alex defeats Dafne, keeping green beans for the Blue Team. Next, Sommer defeats Brett, keeping pomegranate for the Red Team. Alejandro defeats Cheyenne, giving the Red Team pineapple. Abe defeats Tara, giving the Red Team gruyere. Ileana defeats Vlad, giving the Blue Team figs. The game continues and each team ends up with all sorts of random ingredients to go with their proteins. The Red Team feels confident they’ll have a better menu.

8:25 p.m. — For this task, both teams must incorporate all the ingredients from the game show with their assigned game meats. As time winds down in the cooking challenge, Tara’s wild boar looks wildly undercooked. Thankfully, before this challenge is judged, teams will review all of their plates and decide which dishes Gordon will taste. For the boar it’s Dafne vs. Sakari, for the venison it’s Cheyenne vs. Brett and for the duck it’s Sommer vs. Abe. Next, Gordon introduces James Beard Award-winning chefs of “Jon & Vinny’s,” John Shook and Vinny Dotolo, to help judge this challenge.

8:30 p.m. — First up is the wild boar. Dafne’s is “tough” but the flavors are nice. Sakari’s is a “really strong” dish and tastes “fresh.” Sakari wins this point for the Blue Team. Next is Sommer vs. Abe. Sommer’s duck is “cooked beautifully” and Abe’s is “bloody,” resulting in the Red Team earning a point. It all comes down to the venison. Brett’s is “really good” but the side dish is like a “car crash.” Cheyenne’s meat is dry, but the sides make up for it. The winner is Cheyenne and the Red Team avoids punishment. For their reward, they’ll have an afternoon of bowling with a mind-boggling spread of food. The Blue Team will be pitting olives all day. Alejandro decides to use his punishment pass and takes away Tara’s reward, sending her to her fifth punishment. She’s furious. Sommer tries to console her and eventually Alex decides he should go apologize.

8:40 p.m. — When Alex approaches Tara and asks, “Do you feel bad?” she walks away and says, “Go f*** yourself.” So Alex and the Red Team head off to the bowling alley while the Blue Team and Tara pits olives. While Tara hangs out with the Blue Team she reiterates that she hates young girls because they’re “catty.” Later that day, following the rewards and punishments, Gordon calls everyone back down to the kitchen for an announcement. Earlier in the day, five chefs decided to drop their dishes at the challenge because they were under par. Gordon warns that he’s always said to them, “Never let anything get in your way.” Now those five who dropped out of the earlier challenge will have to cook for their lives. At least one will go home.

8:50 p.m. — The five chefs competing to stay in the competition are Alejandro, Alex, Ileana, Tara and Vlad. They’ll have 40 minutes to prepare their best chicken dish. Tara looks the most frazzled, wandering around looking for pans and stalling. Meanwhile, Alejandro is taking a risk, putting some polenta in boiling water, hoping there is enough time to cook it. Alex is playing it safe, staying with what he knows, but his chicken isn’t fully cooked yet and time is winding down.

9:00 p.m. — It’s time for the chefs to present their dishes. Alejandro’s chicken is cooked “beautifully” and it was a good effort. Ileana’s eggplant puree is too thick and too sweet, but she has a great sear on the chicken. After those two dishes, Gordon declares Alejandro safe and sends him back to the dorm. Next, Tara’s chicken is “delicious” but the carrot puree is “dull” and brings the dish down. Nevertheless, Tara’s dish is “excellent” overall and Gordon sends her back to the dorm. Alex is next with “exceptional” puree and a “beautiful” crisp on his chicken. Alex is safe! Vlad is up last, so either he or Ileana will be leaving the competition. Vlad’s chicken is “beautiful” but his crispy mushrooms are getting soggy because of their plate placement.

9:02 p.m. — The chef leaving Hell’s Kitchen tonight is Ileana. Gordon tells her she’s not ready to become his head chef and he encourages her to “keep going.” In closing, Gordon remarks, “When you’re cooking for your life, every detail matters. One overly sweet puree got Ileana sent away.”