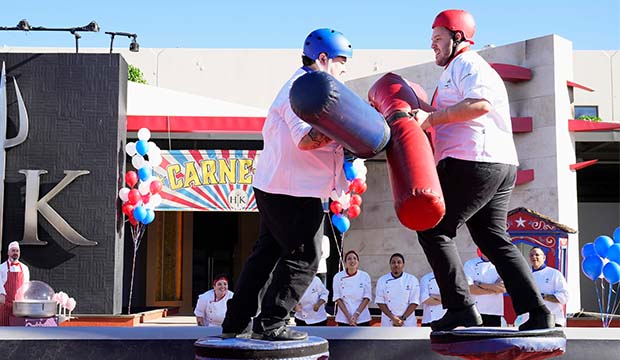 The competition get fierce when the final 10 chefs compete for a grand advantage at HK Carne-Val! One chef from each team will go head-to-head in different carnival games to gain a major advantage in the challenge. Who will make the most amazing steak and impress Gordon in the all-new “Putting the Carne in Carnival” episode of “Hell’s Kitchen” airing Thursday, December 8 (8:00-9:02 PM ET/PT) on FOX.

Below, read our minute-by-minute “Hell’s Kitchen: Battle of the Ages” recap of Season 21, Episode 9, titled “Putting the Carne in Carnival” to find out what happened Thursday, December 8 at 8:00 p.m. ET/PT. Then be sure to sound off in the comments section about your favorite aspiring chefs on Fox’s reality TV show and who you think has what it takes to join the “HK” winners list. See which contestants are still competing below.

8:00 p.m. — “Previously on ‘Hell’s Kitchen’!” In Episode 8, chefs stepped up to compete one-on-one in an ingredient game show. Contestants who won could either choose the fate of that ingredient or sabotage the other team. Next, both teams incorporated all the ingredients from the game show with their assigned game meats. The Red Team came out on top, and Alex set Tara into a rage when he stole her prize and sent her in for her fifth punishment. Following dinner service, Gordon chopped Ileana D’Silva, stating, “When you’re cooking for your life, every detail matters. One overly sweet puree got Ileana sent away.”

8:10 p.m. — After Ileana’s elimination, just four women remain in the competition. The men realize that one of them will likely be traded to the Red Team to even things out. The next morning, Gordon welcomes everyone to the HK-Carne-Val. But before the games begin, Gordon asks the ladies who they’d like to join them from the Blue Team. Their answer is Alex, but the host gives them Brett instead! The aspiring chef isn’t upset about it and says he gets along with women better anyways. Back to the business at hand, teams will now go head-to-head in various carnival games to earn a five-minute advantage in the next cooking challenge. Up first, Alejandro defeats Brett for a NY Strip advantage, Tara earns an advantage over Vlad for her Rib Cap, Sakari wins an advantage over Dafne with Hanger Steak, Abe defeats Cheyenne for an advantage with his Ribeye and Sommer defeats Alex for a Filet Mignon edge. Now it’s time to cook. Those with the five minute advantage take off first, followed by the losers once their penalty has expired.

8:30 p.m. — It’s time for each chef to go head-to-head once again with their respective steaks. For the Hanger, Dafne defeats Sakari. For the Rib Cap, Vlad defeats Tara. For the Ribeye, Cheyenne defeats Abe. For the NY Strip, Alejandro defeats Brett. With an even score of 2-2, it all comes down to Sommer vs. Alex and their filet mignons. The winner is Sommer and the Red Team! Gordon sends them overnight to the Presidential Suite at Paradise Point in San Diego, where they’ll enjoy jet skiing. The Blue Team will stay back and clean the dorms. There’s more — the Blue Team will also need to prep carrots and turnips for tomorrow’s dinner service.

8:35 p.m. — Following a day of luxury, the Red Team joins the Blue Team in the kitchen to prepare for tonight’s “Steak Night” in Hell’s Kitchen. The dining room fills in with meat lovers and orders begin pouring in. It’s a whole new menu this week, which could throw chefs off if they aren’t paying close attention to detail. Brett struggles early with his shrimp scampi for the Red Team. Meanwhile, Alex stalls the Blue Team with some cold crab cakes. Appetizers are flying out of the Red kitchen and the diners are impressed.

8:45 p.m. — Tara is setting fires while knowing all eyes are on her tonight. She’s trying to keep it together at the meat station — meanwhile Dafne suffers a minor setback at the garnish station. The Red Team recovers and begins sending their steaks out to hungry diners. Troubles arise for the Blue Team when they serve up raw salmon and undercooked steak, putting Alejandro and Vlad in the hot seat. The Red Team focuses on keeping Tara on track, practically begging her to communicate. When she puts up a raw steak, Gordon loses his cool. Neither team is impressing him.

8:55 p.m. — Alejandro’s re-fired salmon does the trick and he recovers from his earlier blunder. Next, the Red Team figures out how to get on the same page and sends out some delicious steaks. Things aren’t going so well for the Blue Team, who is called into the storage room after serving up overcooked filets. Vlad is humiliated. Eventually, dinner service comes to an end with both teams intact, but Gordon isn’t happy. He says both the Blue Team and the Read Team are losers and must come up with two chefs to nominate for elimination.

9:02 p.m. — The Blue Team has nominated Alejandro and Vlad for elimination. The Red Team has nominated Brett and Tara (after some fireworks in which Cheyenne called Tara “weak”). Each chefs fights for their place in the competition and pleads their case to Gordon. In the end, the chef leaving Hell’s Kitchen is Vlad. Gordon says he needs to learn the difference between a meat thermometer and a cake tester. Ouch! In his closing statement, Gordon says, “It’s called cake tester for a reason. It tests cakes, not steaks. Vlad, that was bad!”