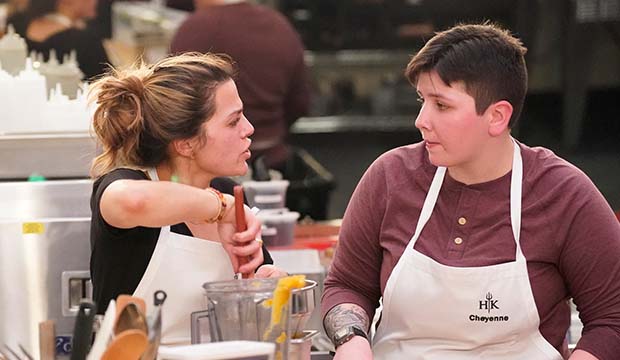 Hit culinary competition “Hell’s Kitchen” returns for its 21st season, with Chef Gordon Ramsay back in Los Angeles. For the first time ever, the well-seasoned 40-somethings will take on the fresh up-and-coming 20-somethings in a battle of the ages. These 18 all-new chef-testants enter the kitchen, with Christina Wilson and Jason “Jay” Santos returning as sous-chefs for the Red Team and Blue Team, respectively. At stake for the winner? A $250,000 cash prize and the head chef position at Gordon’s brand new Hell’s Kitchen Caesar’s Atlantic City. So how’d it all play out in Thursday’s season 21 premiere?

Below, read our minute-by-minute “Hell’s Kitchen: Young Guns” recap of Season 21, Episode 1, titled “Let the Battle Begin,” to find out what happened Thursday, September 29 at 8:00 p.m. ET/PT. Then be sure to sound off in the comments section about your favorite aspiring chefs on Fox’s reality TV show and who you think has what it takes to join the “HK” winners list.

8:00 p.m. — “Previously on ‘Hell’s Kitchen’!” In last season’s finale, it all came down to Trent Garvey vs. Megan Gill. In the end, Chef Ramsay chose to award Trent with the head chef position at his Gordon Ramsay Steak restaurant. “I put everything on the table so I was entirely at peace,” Trent told Gold Derby about the moments leading up to the winner being announced. “I either lost to an awesome contestant or I put it all on the table and Chef Ramsay sees what I did and wants me to win this thing.” But enough about last season. Will the 40-somethings or 20-somethings prevail in Los Angeles? Let’s go!

8:06 p.m. — This season’s contestants travel by limo to the Hell’s Kitchen compound. Along the way they introduce each other, including a cocky 26-year old named Vlad, a confident 29-year old Dafne and a 48-year old named Zeus who says he’s “still a kid at heart.” Once they arrive, sous-chefs Christina and Jason say hello before Gordon arrives via monster truck. Would you expect anything less? Gordon says he’s looking for a chef to get him where he needs to go. Does he want a younger chef bursting with new ideas, creativity and energy? Or a an older chef who has been battle tested, solid as a rock and very consistent? Get ready for “Hell’s Kitchen: Battle of the Ages”! The teams are divided up by age and it’s time for the first big challenge. Everyone has 45 minutes to cook up their signature dish.

8:15 p.m.  — The signature dish is a great way for these chefs to introduce themselves to Gordon. But it also sets the tone for the season. Who is will to take a chance? And who plays it safe? As they cook we get to hear small clips of players talking about their real-world restaurant experience. Ileana is cooking risotto and I can’t help but think, EVERYONE screws up risotto on these cooking contests. I can’t even think of how many times I’ve seen someone go home for overcooked or undercooked rice in their risotto.

8:35 p.m. — Time has expired for this challenge and the chefs plated their dishes. For this contest, Gordon will score each dish from 1-5, with 5 being “stunning and delicious” and 1 being being “wretched” and not up to his standard. Here are the match-ups and scores for each team:

8:45 p.m. — The Blue Team and the Red Team have tied, each scoring 31 points on this challenge. To break the tie, Gordon calls down the best two dishes: Alex for the Blue Team and Sakari for the Red Team. Both are stunning and beautifully cooked, but the dish with the slight edge is Sakari’s. The Red Team has won the first challenge this season and Sakari can feel proud of being tonight’s MVP. The Red Team has won a sunset dinner cruise on board a 120-foot luxury yacht. The Blue Team will unload trucks full of the day’s deliveries and clean up both kitchens. Gordon tells Nicole that if she had only made fresh pasta instead of using a boxed pasta, the Blue Team would be setting sail.

8:55 p.m. — The Blue Team is a little salty about losing to a team of 20-somethings. They’re determined to show Gordon they can cook and plan to rebound at the next service challenge. Meanwhile, Gordon joins the Red Team on a moonlit yacht ride and congratulates them on their first challenge win.

9:02 p.m. — A new day dawns at Hell’s Kitchen as the battle of the ages continues. Gordon says the chefs are about to embark on another challenge, and a punishment pass is up for grabs! Each chef has 40 minutes to cook a delicious, elevated chicken wing. The winning chef on each team will receive a punishment pass. The chef with the worst chicken wings will be going home. This challenge will be continued…