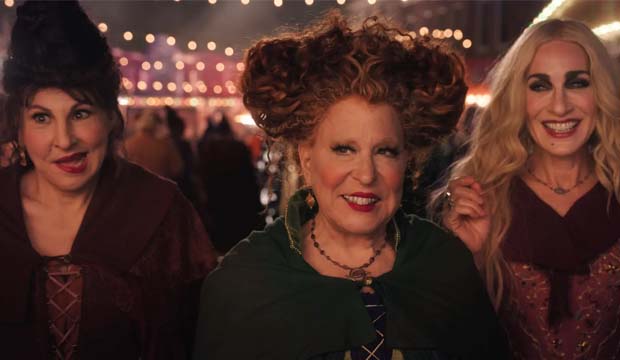 “Hocus Pocus” was released in 1993, and the fantasy about a comedic trio of witches played by Bette Midler, Sarah Jessica Parker and Kathy Najimi failed to cast a spell over critics or the box office. But nearly three decades later, the film is a Halloween cult classic adored by fans who received a treat on September 30, 2022 with the release of “Hocus Pocus 2″ on Disney+.  After their defeat at the hands of two teenagers, a child, a talking cat, and a zombie, the Sanderson Sisters are back for another adventure directed by Anne Fletcher. With a score of 60% on Rotten Tomatoes, history may have repeated itself in regards to the critics, who had a mixed reaction to the long awaited sequel.

Kimberly Pierce of Geek Girl Authority begins by noting the nostalgic nature around the film and the expectations that arose as a result. When our favorite witchy trio is brought back to Salem, they waste no time trying to accomplish the goal they so gloriously failed at in 1993. “The originals who return (and many of them have) aren’t missing a beat. Even better, the new cast joining the fold meld in smoothly.” Despite the fact that the stakes are not as high this time around as dictated by the script, there is a new, dare we say more interesting aspect to investigate: the human side of the Sanderson Sisters. “Keep an eye out for Taylor Henderson, who steals the early minutes of the movie as young Winifred. Her Bette Midler impression is uncanny.” Pierce concludes, “When all is said and done, though, Hocus Pocus 2 is ultimately a cute little family film, probably far more fantasy than horror.”

Joanna Langfield of The Movie Minute was not as impressed. While praising the adult cast of the film, this critic notes that Midler quickly becomes the movie’s most valuable player. “Poor Kathy Najimy isn’t given much to do except nod enthusiastically, Sarah Jessica Parker does the most she can with her few moments in the sun and then there’s Bette Midler. I don’t know if the script or production was designed to do so, but the movie seems to shift, everybody just moving out of the way when Midler shows up. And show up she does, knowing the assignment and nailing it, in each and every scene.” In the end, the film is not nearly as funny as it could have been, as seen in a riotous scene that takes place at Walgreens, and shows a glimpse of the clever film that could have been.

Chelsea Steiner of The Mary Sue states,“Directed by Anne Fletcher (The Proposal), Hocus Pocus 2 knows exactly what its core audience wants to see: bickering witches, impromptu musical numbers, and confusion over modern technology. And the film delivers in spades, thanks to the terrific performances of the witchy trio.” The chemistry between the main three remains deliciously perfect.  “Hannah Waddingham also makes a delightful cameo as Mother Witch, who inspires the Sanderson sisters to begin their magical journey.” Adding backstory, even to the infamous spell book that we all know and love, adds even more depth to the film that is unexpected. “So go ahead and grab your broomstick, your Swiffer, and your Roombas, and be prepared to run amok, amok, amok.”

Nell Minow of RogerEbert.com praises the sequel, especially its adult cast. “The first movie was about the relationships between brothers and sisters (with a little teen romance); this one is about friendship. And we get a bit of an origin story.” Alas, the virginity joke is mentioned but not nearly as much as it was in the prior film. “The challenge for the sequel to a beloved film is maintaining enough of the original to make the fans happy without being too repetitive or confusing newcomers, and ‘Hocus Pocus 2’ gets that just right.”