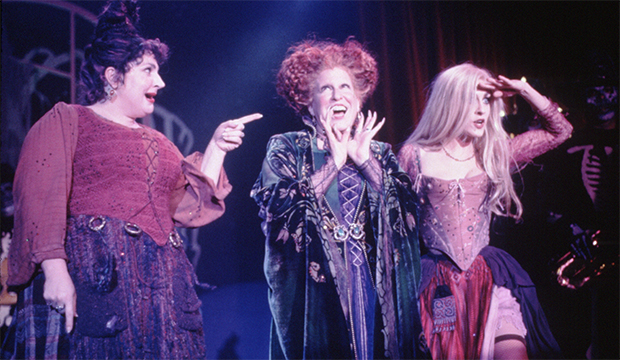 Almost 30 years after the original “Hocus Pocus” hit theaters (and became a cult classic), a sequel has finally been produced. “Hocus Pocus 2” is scheduled to stream on Disney Plus on September 30, 2022, with many of the original cast members reprising their spooky roles. Among the returnees are the three sister witches — Bette Midler as Winifred “Winnie” Sanderson, Sarah Jessica Parker as Sarah Sanderson and Kathy Najimy as Mary Sanderson — plus Doug Jones as zombie William “Billy” Butcherson.

A film sequel has been in discussion since as far back as 2014, but it wasn’t officially greenlit until October 2019. Jen D’Angelo wrote the screenplay and Anne Fletcher serves as the director, replacing original director Adam Shankman, who was too busy filming “Disenchanted.” In November 2021, Disney released the first image of the Sanderson sisters in costume, with the tagline, “They’re already running amok, amok, amok.” Scroll through our photos above (or click here for direct access) for everything to know about “Hocus Pocus 2,” including cast photos and a release date.

The original “Hocus Pocus” debuted in the U.S. on July 16, 1993 to mixed reviews. The film only made $28 million domestically from a reported budget of $45 million, making it a box office bomb. However, thanks to the Disney Channel and Freeform airing (and re-airing) “Hocus Pocus” every October, it found a new audience and earned “cult classic” status. When fans started demanding a sequel, the original cast members were all on board and the rest is history.

Disney+ has announced that “Hocus Pocus 2” will debut on September 30, 2022. Producer Adam Shankman confirmed that the film wrapped production on January 28. On June 28, a teaser trailer was officially unveiled — watch it here.