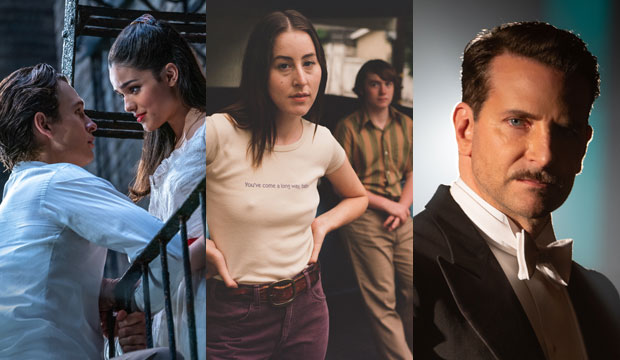 Historically he holidays have been a great time for awards voters to catch up on movies they missed over the year. On top of that, the wiser studios know that those working in the industry have a much-needed break to rest up … and catch up on said movies. This is part of the reason why so many potential Oscars movies were released in November and December in hopes they can stir up enough buzz and discussion to stick around until January, when Oscar voting starts.

But with the rise of streaming services and the ongoing pandemic, the box office is no longer the only story in terms of how well a movie is faring in the Oscar race. Just look at the current GoldDerby odds for Best Picture: you have to scroll down to number-six, Denis Villeneuve‘s “Dune,” for any movie that has grossed or reported $100 million at the domestic box office, but four of the movies ahead of it have received significant theatrical releases.

Let’s start with the Steven Spielberg in the room, and his first attempt at a musical, “West Side Story.” The movie opened with less than $11 million, and by Christmas Eve it had grossed $21.1 million. This holiday season saw the rise of the Omicron variant, which kept many older moviegoers home. While it’s still under $30 million after the New Year’s weekend, that may end up being the second-biggest gross for a Best Picture nominee this year after “Dune.”

Not doing quite as well is Guillermo del Toro’s noir thriller “Nightmare Alley,” which had the misfortune of opening against “Spider-Man: No Way Home” on December 17. The holiday weekend didn’t help it at all, as it dropped 58% right out of the top 10, and it’s only grossed about $8 million so far. While the movie has a lot to offer on the below-the-line side of things, its B-grade CinemaScore and its poor box office showing may ultimately hurt its chances at getting into the Best Picture race. (Searchlight Studios would be wise to put this on fellow Disney-owned platform Hulu before the Oscar-nominating period.)

That brings us to Paul Thomas Anderson’s “Licorice Pizza,” which doesn’t have anywhere near the star power of the above two movies – except for a small part for “Nightmare Alley’s” Bradley Cooper. The movie expanded nationwide into 750 theaters on Christmas Day but made a middling $1.9 million, or $2,432 per theater, which was the fifth best average in the top 10. But the bigger concern for Anderson’s movie might be the backlash against the age discrepancy between the two main characters played by rock star Alana Haim and Cooper Hoffman, but even more so by a decision by the filmmaker to include some flagrant racism from a character played by John Michael Higgins, which raised the ire of Asian advocacy groups. It has grossed $6.3 million overall, and it’s unclear whether United Artists Releasing will try to expand it further sometime in the slower month of January.

UA Releasing also did something interesting with Joe Wright’s “Cyrano,” and by “interesting,” I mean “potentially foolhardy.” The studio only released the musical, which received huge buzz out of Telluride for a potential Oscar nomination for Peter Dinklage, into a few theaters in L.A. the week before Christmas. It was a nominal one-week release to qualify it for Oscars, but it won’t be getting a proper limited release until January 28, 2022, in the midst of Oscar nomination voting. No box office has been reported.

SEEMost Oscars won by a film: ‘The Lord of the Rings,’ ‘Titanic’ and … [PHOTOS]

One movie that hasn’t been in the Oscar conversation as much is Universal’s animated sequel “Sing 2,” which did exceptionally well over the holiday weekend, or at least relative to everything else. It grossed nearly $40 million in its first five days – not great for a pre-pandemic release, but not bad for a theatrical opening fighting against the fears of the Omicron strain of COVID-19. “Sing 2” is clearly looking for one of the five slots in the Animated Feature Oscar race, and the A+ CinemaScore it received at least shows popular approval, though that’s rarely criteria enough for the academy’s animation branch to nominate a movie.

We then get into some of the limited releases, including Joel Coen’s “The Tragedy of Macbeth,” starring Denzel Washington and Frances McDormand, and Pedro Almodóvar’s “Parallel Mothers,” once again teaming him with Penélope Cruz. That is a whole mess of previous Oscar winners right there, although we can only look at the box office of the latter since the former is from Apple Studios and did not release box office information. Almodovar’s latest made $38,249 in three theaters in New York and L.A.

Both “Don’t Look Up” and “The Lost Daughter” hit the Netflix streaming service over the holidays where Jane Campion’s “The Power of the Dog” has been for a few weeks now. Maggie Gyllenhaal’s film only hit streaming on Friday so it’s hard to really gauge viewership, but a lot of people watched “Don’t Look Up” going by all the chatter about the movie online. The polarized opinions certainly helped the awareness needed for the movie to be looked at by awards voters, even if the divisiveness surrounding Adam McKay’s political comedy might not help with Oscar voters, even in a Best Picture race with 10 nominees. Didn’t hurt “Joker,” though.

SEEOscar history in the making: ‘The Power of the Dog’ would be 3rd film to win 3 acting races

“Being the Ricardos” was also released on Amazon Prime Video. And — surprise, surprise — viewers also went after writer/director Aaron Sorkin, but more for his backing of “Succession” star Jeremy Strong then anything actually in the movie. It will be easier to see if that put a dent in the actors’-favorite filmmaker when SAG Awards nominees are announced on January 12, but it might actually help Sorkin’s movie with the actors guild.

Other movies, such as “Belfast” and “King Richard,” have pretty much given up their theaters. “Belfast” was only in 77 theaters over Christmas weekend, and it’s only grossed $6.8 million so far, as it’s now on VOD. The Will Smith sports drama hasn’t reported box office, but in the weekend before Christmas it was only in 207 theaters and had already left HBO Max. It has grossed $14.7 million at last reporting.

Maybe we just need to start realizing that the Oscars will no longer be considered as something that is counterbalanced with box office success, if it indeed ever was. No movies are doing that great in theaters, while a lot more are being discovered on streaming, but that is a discussion for another time.