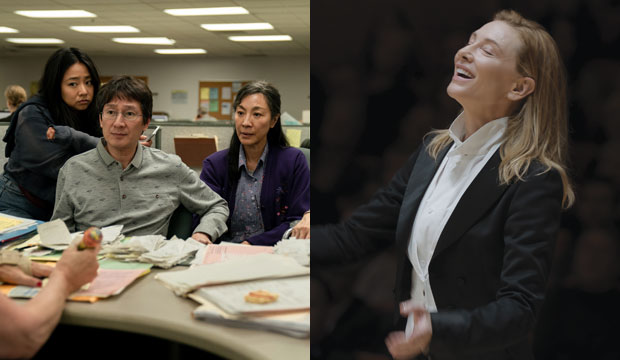 If you’re paying attention to the early awards season, it may be starting to look like the two leading Oscar contenders for Best Picture are “Everything Everywhere All at Once” and “TAR.” The two films cleaned up in the nominations at the Gotham Awards and Spirit Awards, putting them at the forefront. But these early awards are strictly focused on lower-budget films and thus contenders like “The Fabelmans” weren’t eligible. So are these really becoming Oscar front-runners, or will they take a backseat when all-budget-inclusive awards and nominations are announced?

The wishy-washy answer is, it depends. This past decade there was a streak of four years in a row when the Spirit Awards matched the Oscar winner for Best Picture: “12 Years a Slave” (2013), “Birdman” (2014), “Spotlight” (2015), and “Moonlight” (2016). Then “Nomadland” (2020) came a few years later and also claimed both. But if the wind is blowing towards a Spirits-ineligible film, Spirit Awards recognition doesn’t necessarily change that.

For instance, “If Beale Street Could Talk” (2018) won the top Spirit Award but wasn’t nominated for Best Picture at the Oscars; “Green Book” was the academy’s choice that year. The following year “Parasite” won Best Picture at the Oscars but was only eligible for Best International Film at the US-focused Spirits, which it won. Ironically, last year’s Oscar winner “CODA” was a bona fide indie film, but it didn’t pick up steam in the awards race until the very end, so it wasn’t even nominated for Best Feature at the Spirits. Ultimately, the Spirits and the Oscars didn’t have any best film nominees in common last year.

The Gotham Awards also have a mixed record when it comes to agreement with the Oscars. They joined in the Spirit and Oscar huzzahs for “Birdman,” “Spotlight,” “Moonlight,” and “Nomadland,” but while most top Gotham winners tend to be Oscar nominees in at least one category or another (every Gotham winner save “The Rider,” in fact), they’re not a consistent influence on Best Picture.

However, what “Everything Everywhere” and “TAR” have done by doing so well at both events is set themselves up as the indie standard-bearers in the Best Picture race. If they weren’t already, they’re becoming must-see films for academy members before they mark their ballots this coming winter, and that kind of visibility is valuable, especially for lower-budget films.