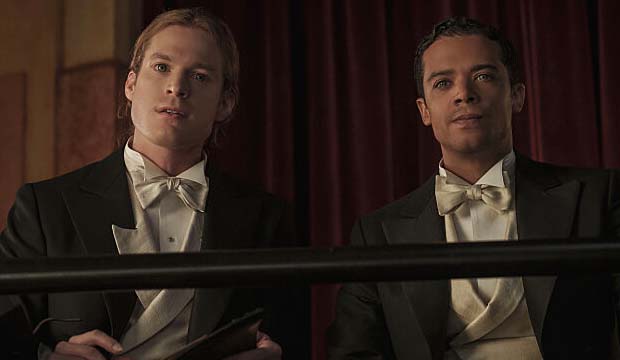 “Interview with the Vampire” got some new blood when it premiered on AMC as a TV series on Sunday, October 2. The new show was created by Rolin Jones and is based on the 1976 novel of the same name by Anne Rice. Critics took to the gothic story, which currently holds a freshness rating of 98% on Rotten Tomatoes. The consensus reads, “With a playful tone and an expansive sweep that allows Anne Rice’s gothic opus to mull like a chalice of blood, Interview with the Vampire puts a stake through concerns that this story couldn’t be successfully resurrected.”

Allison Picurro of TV Guide notes that the series takes no time ensuring that the queer subtext of the film is right in the forefront of this series. It “stands as a monument to Rice’s work that fits into our present. It’s overwrought, maximalist camp, bolstered by wholly committed performances from Anderson, Bogosian, Reid, and the rest of the ensemble. It’s the crazy, sexy, queer adaptation Rice’s crazy, sexy, queer story always deserved.” She adds, “’Interview with the Vampire’ is exactly what it needs to be, in all of its bloody, ridiculous, gay glory.”

Darren Franich of Entertainment Weekly praises the series noting that it “blends swoony Southern Gothic with cadaverous relationship farce, though it struggles when it shifts its gaze from the intriguing main characters.” Anderson shines in a role that is the polar opposite of his iconic role in “Game of Thrones” and has incredible chemistry with Reid. Bailey Bass is equally praised, with Franich noting her “arrival ups the body count and boils over tension between Lestat’s nasty disinterest and Louis’ shaky morality.”

Carly Lane of Collider applauds AMC for bringing “new life into these characters without shying away from any of the original story’s truest elements, while incorporating mindful changes to the source material that only make the end product on-screen thrilling, sexy, and more multifaceted.” Anderson and Reid again are singled out as especially noteworthy. “As Lestat, Reid is every bit the mercurial presence you want him to be — and his performance transcends even the eccentricity first established by Cruise in the ’90s adaptation.” She continues, “In fact, the story of Interview with the Vampire is very well-suited to the television format; while the film version was forced to condense several plotlines, here they’re given substantial breathing room, with characters not only introduced but explored much more intimately.” In closing, “The road to a new adaptation has been a winding one, but AMC’s lush and enthralling series proves that Rice’s vampires are in the right hands.”

Brian Tallerico of The Playlist writes, “’Interview with the Vampire’ blends the Southern Gothic escapism of something like ‘True Blood’ with the rich cultural commentary of ‘Hannibal’ and somehow finds a way to keep those two tones from destroying one another. It’s a show that can be very smart about class and race in one scene and just be about a vampire punching through a man’s head in another. It embraces both the intellectual and the carnal in ways that aren’t often seen on TV and were arguably even lacking from Jordan’s version. From ‘Game of Thrones’ to ‘The Lord of the Rings,’ this year in TV has been all about revisiting familiar worlds. Who would have guessed that so much life would be found in this one? [A-]”