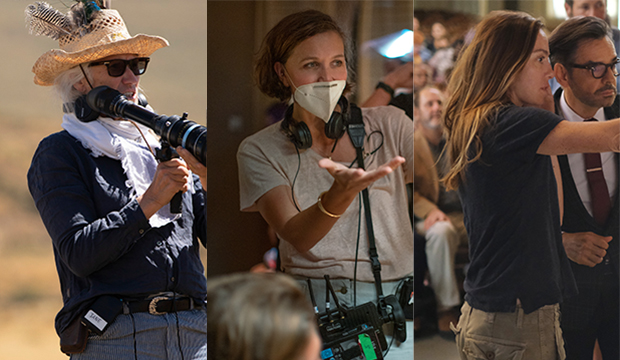 Last year, Emerald Fennell won the Best Original Screenplay Oscar for “Promising Young Woman,” becoming the first female champ in either writing category in 13 years. And an even longer drought has three chances to end this year.

For the first time, Best Adapted Screenplay features three individual female nominees representing three different films (read: no writing teams): Jane Campion for “The Power of the Dog,” Maggie Gyllenhaal for “The Lost Daughter” and Sian Heder for “CODA.” They are up against Ryusuke Hamaguchi and Takamasa Oe for “Drive My Car,” and Jon Spaihts, Denis Villeneuve and Eric Roth for “Dune.” If Campion, Gyllenhaal or Heder prevails, they’d be the category’s first female winner since Diana Ossana, co-writer of 2005’s “Brokeback Mountain” with Larry McMurtry, and the first solo female winner since Emma Thompson, who won for 1995’s “Sense and Sensibility.”

As is the case with nearly all non-gendered categories at the Oscars, there are not a lot of female writing champs despite the fact the earliest women winners date back to the 1930s. The 2010s did not feature a female winner in either category for the first time since the 1960s. If you count the now-defunct Best Story and Best Writing categories, Best Original Screenplay has gone to a woman 13 times, but the tally is at a meager seven in Best Adapted Screenplay — and two of those wins belong to Ruth Prawer Jhabvala (1986’s “A Room with a View,” 1992’s “Howards End”). Jhabvala and Thompson are the only women to win as individuals. Besides Ossana’s collaboration with McMurtry, the category’s first female champ, Sarah Y. Mason, shared her victory for 1933’s “Little Women” with her husband Victor Heerman; Claudine West co-wrote the winning script of 1942’s “Mrs. Miniver” with George Froeschel, James Hilton and Arthur Wimperis; and Fran Walsh and Philippa Boyens penned 2003’s “The Lord of the Rings: The Return of the King,” which swept all 11 of its categories, with Peter Jackson.

SEE Maggie Gyllenhaal is now an Oscar-nominated screenwriter, just like her mother

At the moment, Campion, Gyllenhaal and Heder are the top three in the adapted screenplay odds, followed by the scripts for “Drive My Car” and “Dune.” Campion, who won Best Original Screenplay for 1993’s “The Piano,” has been perched in the top spot all season, earning dozens of critics prizes, and would be the first woman to sweep both writing categories. If she takes Best Director and “The Power of the Dog” scores Best Picture, as they’re currently predicted to, she’d be the first woman to win Best Picture, Best Director and a screenplay award in the same year.

Gyllenhaal, who’s the third woman to have been nominated for acting and writing after Thompson and Ruth Gordon, has collected a handful of awards already for the script of her directorial debut. She’s triumphed at the Venice International Film Festival, the Gotham Awards, the USC Scripter Awards (beating “The Power of the Dog”) and the Independent Spirit Awards, where “The Lost Daughter” nabbed three honors, including Best Feature.

Both “The Power of the Dog” and “The Lost Daughter” are ineligible at the Writers Guild of America Awards, where Heder is nominated and is the odds-on favorite to win. But how much would a victory mean when the only Oscar opposition “CODA” faces there is “Dune”? Last year, “Borat Subsequent Moviefilm” took home WGA in the absence of the WGA-ineligible “Nomadland” and “The Father,” which were top two in the Oscar race, eventually won by the latter.