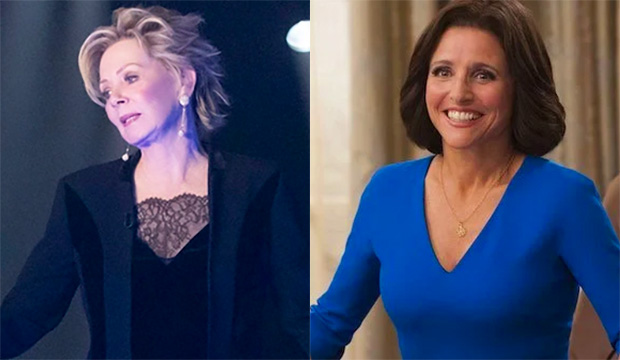 In addition to being the most-awarded actress in SAG Awards and Emmys history, Julia Louis-Dreyfus stands as the only woman who has received back-to-back Best Comedy Actress prizes from both organizations for a single series. She achieved this feat by nabbing individual SAG Awards trophies for “Veep” in 2017 and 2018 after collecting six Emmys in a row for the political sitcom. Now, all signs point to her being joined in this regard by “Hacks” star Jean Smart, whose role on the HBO Max show is the 12th to inspire consecutive Best Comedy Actress Emmy wins and could become the seventh on the corresponding SAG list.

Smart sits securely atop Gold Derby’s odds-based Best Comedy Actress SAG Awards predictions, with her closest competitors being “Abbott Elementary” duo Quinta Brunson and Janelle James, Hannah Waddingham (“Ted Lasso”), and her own “Hacks” costar, Hannah Einbinder. All of these challengers would be new to the category except Waddingham, who Smart bested on her initial outing in February. Juno Temple, who was also nominated here for “Ted Lasso” at the last ceremony, is in the mix in 11th place, while 2019 winner Rachel Brosnahan (“The Marvelous Mrs. Maisel”) is ranked seventh.

Just like last time, Smart will probably once again earn simultaneous guild recognition as a member of her show’s ensemble. In that contest, “Hacks” is running second behind “Abbott Elementary.” Being doubly nominated in this manner is practically a requirement for a Best Comedy Actress SAG Award win, given that only two funny ladies – Tracey Ullman (“Tracey Takes On,” 1999) and White (2012) – have ever taken the solo prize without a group bid.

Another factor that works in Smart’s favor is that the SAG and Emmy choices for Best Comedy Actress have aligned for the last six years. After Louis-Dreyfus and Brosnahan, this lineup includes Phoebe Waller-Bridge (“Fleabag,” 2020) and Catherine O’Hara (“Schitt’s Creek,” 2021). If the ever-popular Smart succeeds at the easy task of extending this trend, there’s no stopping her from continuing to break records.