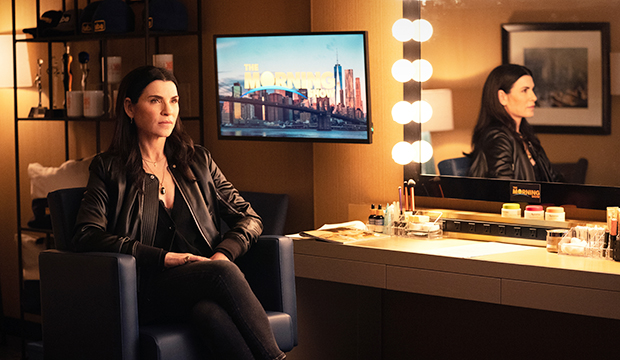 Bad news first: Julianna Margulies can’t break the record for the most Screen Actors Guild Awards wins this year. Now the good news: She can tie it if “The Morning Show” wins drama ensemble.

An eight-time champ, Margulies was the first performer to reach that benchmark in 2011 with her second drama actress statuette for “The Good Wife” and was later joined by Alec Baldwin, whose eight wins includes a comedy actor seven-peat for “30 Rock.” They held the record until 2018 when Julia Louis-Dreyfus took home comedy actress and ensemble awards for “Veep,” setting a new record of nine wins.

Margulies, who recurred on the second season of “The Morning Show” as anchor Laura Peterson, was in play for two nominations this season, drama ensemble and actress. “The Morning Show” made the lineup of the former — after missing it for its debut season despite three individual bids — but Margulies was AWOL in the latter while her co-stars and series leads Jennifer Aniston, who won two years ago, and Reese Witherspoon snatched nominations alongside Jung Ho-yeon (“Squid Game”), Elisabeth Moss (“The Handmaid’s Tale”) and Sarah Snook (“Succession”).

Perhaps Margulies would’ve fared better if the SAG Awards had supporting TV categories, considering how much voters like “The Morning Show” (it has another bid for Billy Crudup) and her. The actress is now a 20-time nominee, tied with Baldwin for third all time and behind only 22-time nominee Edie Falco and 21-time nominee Louis-Dreyfus. Margulies has a record four drama actress wins — two each for “ER” and “The Good Wife” — and a record four drama ensemble awards for “ER.” In fact, if “The Morning Show” nabs the top prize, she will become the first person to win five TV ensemble awards in either drama or comedy.

But “The Morning Show” has its work cut out. The Apple TV+ series is currently in third place in the odds, behind heavy favorite “Succession,” which finally broke through with its first SAG Awards nominations ever (five to boot), and Netflix smash “Squid Game.” The top two are the only nominees with picks from Experts and editors to win. “Yellowstone” is in fourth and “The Handmaid’s Tale” is in fifth. But given Margulies’ SAG Awards track record, maybe she’s Team UBA’s secret weapon.