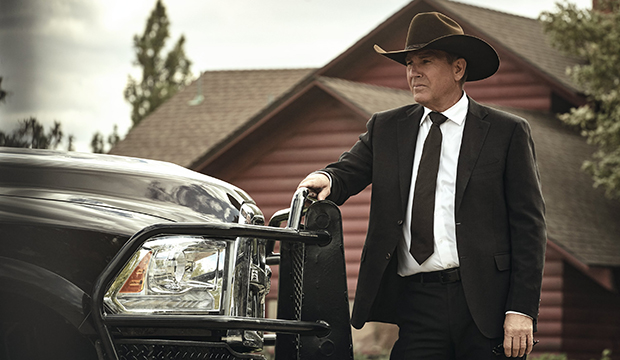 Kevin Costner swears the scripts for three of his classic hit films-1988’s “Bull Durham,” penned by Ron Shelton, 1999’s “Field of Dreams,” adapted by Phil Alden Robinson, and 1990’s “Dances with Wolves,” which won seven Oscars including best film, director for Costner and adapted screenplay for Michael Blake, were so good they were sprinkled with gold dust. And when he read Taylor Sheridan’s pilot script for “Yellowstone,” he “thought this had a little gold dust on it.”

However, as he observed during recent Deadline Zoom interview, “I didn’t, I couldn’t, predict its popularity. But I am never surprised with what quality can turn into. Being popular and being really good doesn’t have to be mutually exclusive. You can never guarantee kind of popular success, critical success. The only thing you can guarantee is that you believe in the script you’re doing and the quality.”

And “Yellowstone” is really good. And really sexy. And really violent. The drama revolves around the Dutton dynasty who own the biggest ranch in Montana. Costner’s John Dutton is willing to do anything to keep his land from the various forces who want to usurp control; Wes Bentley plays his eldest surviving son Jamie — and we learn in season three he’s adopted — the black sheep who feels like an outsider. Kelly Reilly is daughter Beth, a firebrand who is devoted to her father, the ranch and her fiancé Rip (Cole Hauser), the ranch foreman. And Luke Grimes is Kayce, the youngest Dutton son, a former NAVY seal who is married to Monica, a Native American college professor (Kelsey Asbille).

“Yellowstone,” which is set to begin shooting its fifth season in May, has seen its popularity soar during its first four seasons. Over 14 million people tuned into the fourth season premiere and the series became the No. 1 series of 2021 across broadcast, cable and premium in both demos. The series, which has spawned the hit Paramount Network prequel “1883,” is finally getting some love from various guilds. Last year, it was nominated for a Writers Guild Award and is currently in contention with the PGA and SAG Awards as well as the Art Directors Guild and Cinema Audio Society.

Costner, 67, noted that he does relate to John Dutton in a lot of ways. For example, both refuse to let go of something they love. “I don’t fall out of love easily,” he explained.  “Listen, I’m pretty tough about most of my life, but I’m a little baby about my art. If something’s missing [in a movie] I will mourn it forever. So, I understand that kind of hold that you don’t want to let go. You understand when you do, how something gets lost. So, I can relate on that level. Thomas Jefferson said in matters of style go with the flow. In matters of principles, stand like a rock.”

Though Costner does identify with some of his character’s qualities, the same can’t be said of Bentley and Reilly. In fact, it has been increasingly difficult for Bentley to play Jamie as he has gone further down the rabbit hole of darkness. “Just as I am a mystery to myself still, he is a mystery to me,” Bentley noted. “He’s a hard guy for me to play. His principles are almost the exact opposite of mine. What I’m saying, it’s hard to draw from anything from me to play him. So that’s been a challenge to dive into Jamie.”

Still, Bentley relishes embodying men whom society deems as bad or who have lost their way “because I want to know what the attributes are, what are the things about them that got them [there]. They can’t be totally terrible. I try to lean into Jamie’s good [attributes] but the writing takes me down the bad path.” Though Jamie has been a challenge, it’s a “very beautiful” thing to be able to play him. “I mean, I want to do what I’m doing. It’s just I know the toll it’s going to take. I want these challenges. I want this to be hard. I want this to be something I have to work for. It’s what I want as an actor.”

Though Beth and Jamie have a love/hate relationship, Bentley and Reilly have been incredibly close. “We worked from the beginning to develop [that relationship] because we are so far from these people,” said Bentley. “I think we trust each other so deeply and that makes these things work because that allows us to go really far with each other and push the boundaries. Kelly is such an amazing person, so easy to work with anyway. But she really goes out of her way to focus on making sure we continue to maintain that trust.”

“The danger aspect of it feels really exciting because we don’t have to check on each other to see if we’re okay,” Reilly explained.  It’s like ‘Right, let’s go.’ I enjoy that. I love that as an actor. I love feeling like you’re in your top game. You feel like you’re behind the wheel doing a thousand miles per hour.”