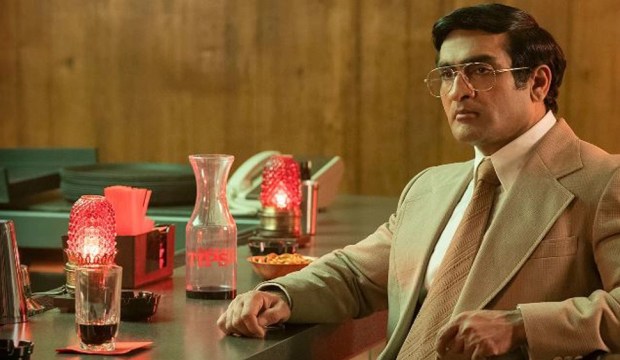 November 22 is officially ladies’ night, when “Welcome to Chippendales” debuts on Hulu.

The new series—a behind-the-scenes look at the building of a beefcake empire—is perfect fodder for a streaming series. It’s a brand everyone knows with a shocking true-crime element, it’s set in the 1980s, and it has built-in lusty sequences to keep people watching. Imagine if “WeCrashed” or “The Dropout” had six-pack abs!

The eight-episode series was created by Robert Siegel, whose career began as editor-in-chief of The Onion (it was on his watch that the legendary post-9/11 issue was published), who then wrote “The Wrestler” for Darren Aronofsky, which won the Golden Lion at the Venice Film Festival and scored Oscar nominations for Mickey Rourke and Marisa Tomei. Siegel then wrote and directed the film “Big Fan.” More recently, he created Hulu’s limited series “Pam & Tommy,” which was nominated for 10 Emmys.

Kumail Nanjiani, the Pakistani-born star of “The Big Sick” and “Eternals,” plays the lead role of Somen “Steve” Banerjee, the Indian-American entrepreneur who was the first to dream up an elaborate striptease show for women. As Chippendales still exists all these decades later (you can visit their home theater at the Rio in Las Vegas or catch their touring show) one can certainly call Banerjee’s vision a success. But at what cost? “Welcome to Chippendales”’s teaser trailer gives us an inkling. (A recent nine-part podcast, “Welcome To Your Fantasy,” also bared all about the unusual story.)

Co-starring with Nanjiani is Murray Bartlett, as the show’s choreographer Nick De Noia, Annaleigh Ashford, Dan Stevens, Juliette Lewis, and Nicola Peltz as Dorothy Stratten. And if you don’t know her story, well, we’ve got another true-crime movie you can watch. Matt Shakman of “WandaVision” directed the series’s first episode.