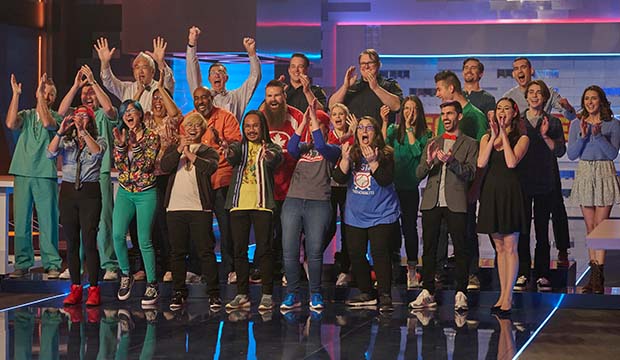 Good news America, “Lego Masters” is back! Host Will Arnett introduces new teams of LEGO enthusiasts about to embark in a brick blasting Season 3! With infinite possibilities and an unlimited supply of LEGO bricks, teams of two will compete against each other in even more ambitious brick-building challenges for a $100,000 cash prize, the ultimate LEGO trophy and the grand title of Lego Masters.

In the season premiere episode, the talented duos are introduced and tasked with a space-themed challenge, where contestants are commissioned to build a fun, colorful, personalized spaceship that tells the judges something about their team in the all-new “Ready to Launch” season premiere episode of “Lego Masters” airing Wednesday, September 21 (9:02-10:00 PM ET/PT) on Fox. Brickmasters Amy Corbett and Jamie Berard return as judges.

Below, follow our Season 3, Episode 1 recap of “Lego Masters.”

9:02 p.m. — Previously, on “Lego Masters”! On the Season 2 finale, three teams of brothers duked it out for the $100,000 grand prize and the title of Lego Masters. They were given the freedom to design, construct and blow the judges away with their own master build. Mark & Steven came out on top with their “Warden of the Woods,” claiming the title over runners-up Zack & Wayne and third-place finishers Caleb & Jacob. But enough about last season. Let’s meet the teams competing in Season 3!

9:07 p.m. — After a fun little sketch featuring the Lego versions of Will and executive producer Brad Pitt, the new contestants walk into the Build Room for the first time. Behind Will is the Brick Pit and in front of him are 12 teams competing to become Lego Masters. Brickmasters Amy and Jamie are introduced before Will announces in this first challenge, everyone’s going to space! Teams will build their very own personalized space craft. Will wants to see something completely original that introduces them to the Lego universe. Amy tells everyone to make a statement and show the judges who they are. Jamie adds that the entire model will be suspended by a single attachment on the Lego Space Station. The competition begins now!

9:09 p.m. — Throughout the challenge we get to know some of the contestants. Stephen & Stephen are firefighters who met 13 years ago at a Lego store. They have been friends ever since and thought this would be a great opportunity to show that firefighters are not just a bunch of macho guys that sit in the fire hall. They’re fun-loving characters. Building something that represents firefighters is important to them, so they’ve decided to go with a very iconic image in the form of a Maltese Cross, which is on the uniforms of all firefighters around the world.

9:12 p.m. — Emily & Liam are the first mother/son duo to ever appear on the show. Liam has played with Legos since he was six years old and Emily is just thrilled he chose to do this with her. Their family loves to travel and explore nature wherever they go. They’ll build a spaceship that collects plants for their space garden. Next we see Drew & Miranda, siblings from small town Idaho. They’ve been building with Legos since Drew was five years old. Next, Austin & Justin explain they’re building a spacecraft shaped like a medical bag because they’re pediatricians.  Grandpappies Kerry & Patrick are thrilled to share their stories and influence their grandkids by participating on “Lego Masters.” Jonathan & Xavier highlight their Filipino culture by building “The Millennium Mango.”

9:20 p.m. — Nick & Stacey are live streamers who build Legos virtually. They’re building a live streaming space cruiser and because they’re both Canadian it will be powered by maple syrup. Christine & Michelle are friends with music in their blood and they’re building a dance floor because they’ve got music in their blood. Asiza & Eddie grew up in an area where it wasn’t safe for kids, so a lot of times they were inside with Lego. They’re building the L.S.S. Smile Check because they try to spread positivity and smiles wherever they go. Liz & Erin play ukulele together so these two friends are making a rockstar tour ship that is red, white and blue to represent Boston sports teams. Brendan & Greg are brothers who are competitive by nature. They’re here for the trophy. Their ship will represent themselves as brothers and teammates.

9:30 p.m. — Kerry & Patrick are building a space party shaped like a boom box. These grandpappies aren’t afraid of a good time. As time progresses the teams start to show some stress. Amy and Jamie tour the room telling teams they need to be aware of how they present their builds and put their best feet forward. With over six hours remaining in the challenge, NASA astronaut Jessica Meir arrives. She announces the winner of this challenge will have their build displayed at the Kennedy Space Center. What an incredible incentive!

9:35 p.m. — Dave & Emily are another duo from Canada. The brother/sister duo are building a twin pod cruiser with a hockey theme. This represents family and their country. Next, Will pauses everything to welcome a visitor from space. Dr. Marshburn, who is actually located in a space station I.S.S., says hello via satellite and says they’re excited to see what the Lego Masters are working on. He reminds everyone they have five hours to complete their builds.

9:45 p.m. — Time is winding down and the builders have to get their projects docked to the L.B.S.S. Will calls it the “most tense first build we’ve ever had.” Time expires and the space is race over. Now it’s time to blast off! Who has the best and worst builds of the night? Nick & Stacey are up first with their build “The ILS (Intergalactic Live-Streaming Space Cruiser.” They both love gaming and they have amazing communities, but it’s time to head out in the galaxy and find more brick-building friends. Jamie praises their ability to form round shapes with square objects. Next up are Kerry & Patrick with their “Space Party Shuttle.” It’s the tour of a lifetime with the hottest DJ this side of Jupiter. Amy says, “You guys are here to play!” She loves their use of color. Emily & Liam are the third team up with their “Garden of the Galaxy.” The giant rings create an atmosphere for plants to thrive while they travel through safe. When asked about their power function, they admit they had to give up on that so it doesn’t work as promised. Jamie admits he is disappointed, but he likes that the piece speaks to their ambition. Amy wishes they would have pivoted their idea earlier.

9:55 p.m. — Stephen & Stephen present their “LMFD (Lego Masters Fire Department).” It’s an intergalactic fire station that not only keeps the universe safe, but allows firefighters to have a good time while on break. Jamie says it’s one of the largest models in the room and speaks to their technical skills and willingness to take a risk. Next, Austin & Justin unveil “Universal Healthcare.” It delivers healthcare to all planets in the galaxy and it’s shaped like a doctor’s bag. Jamie calls it “compelling” but Amy can’t even tell this is supposed to be a bag. Christine & Michelle are up next with their “HMM Voyage (Hot Mess Mama).” They wanted a music theme and Jamie is “feeling the vibes” of what they’re offering. Next is John & Xavier’s “The Millennium Mango.” It’s a Filipino mecca that delivers the mangos. Jamie is impressed with the curvature of the structure. Brendan & Greg unveil their structure called “The USS IG (Intergalactic) Phoenix.” The dual cockpits signify they’re brothers there to fight. Dave & Emily show off “The Twin Pod Cruiser” is praised for their literal idea. Liz & Erin’s “Rockstar Tour Ship” brings a wicked awesome band all around the universe. Amy says it’s clear that they bond over a passion for music. Asiza & Eddie built “LSS Smile Check” and it gathers sun rays and transmits them into smiles. Amy says it oozes positivity and Jamie likes how it’s built at an angle. Drew & Miranda built “The Bottle Rocket,” a structure filled with family friendly activities. Amy says the wonderful stories are too hidden.

10:00 p.m. — The winning team for the first challenge for Season 3 is Stephen & Stephen. Their build will be displayed at the Kennedy Space Center in Florida. But who had the worst build of the day? The bottom teams are Drew & Miranda and Austin & Justin. The first team eliminated for Season 3 is Drew & Miranda. The small-town siblings are told, “This is just the beginning of your Lego journey.” Even though they went home first they were thrilled to have had the opportunity.