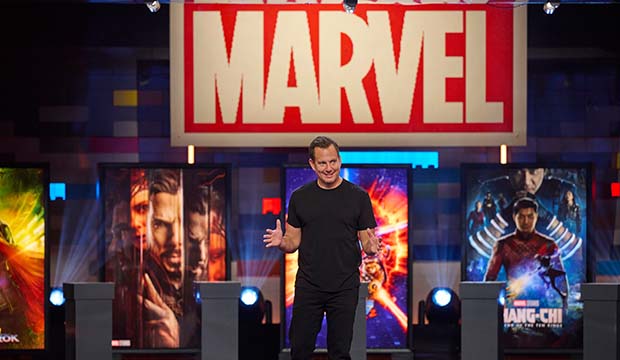 The remaining five teams fight to stay in the competition as they recreate iconic action-packed scenes from the Marvel Cinematic Universe. Each team picks a Super Hero minifigure that represents a battle scene they have to replicate. The pairs have 12 hours to display the energy of their epic movie moment in the all-new “Marvel Masters” episode of “Lego Masters” airing Thursday, Nov. 24 (9:02-10:00 PM ET/PT) on FOX.

Below, follow our Season 3, Episode 10 recap of “Lego Masters.”

9:02 p.m. — Previously, on “Lego Masters”! On Episode 9, teams built tall, strong and stylish castles using only regular bricks. Medieval minifigures selected from a hat determined the theme of each team’s castle. Dave & Emily built the tallest structure, securing immunity for themselves, but it was Brendan & Greg who were named the overall winners of the challenge. Austin & Justin became the second team in a row to be eliminated one week after winning a challenge. How will things unfold tonight?

9:05 p.m. — Teams enter the build room and are thrilled to learn they’ll be entering the Marvel Cinematic Universe to build the most epic battle scenes, showcasing a frozen moment of impact from five different MCU movies. Teams are instructed to remain authentic to the reference material and accurately replicate scenes in brick form. Will reminds Brendan & Greg that this challenge is the last time they can use the golden brick to protect themselves from elimination. Teams have 12 hours to complete their build. Get your brick on!

9:30 p.m. — Amy warns Emily & Liam they will need to add color to their build in order to fully bring it to life as a 3-D image. They seem to be struggling early on, especially with building a sky. Nick & Stacey also seem to be struggling with their backdrop of swirling water. The attention to detail this challenge requires is painstaking.

9:45 p.m. — Time expires and Emily & Liam are devastated that they didn’t quite finish their build. They hope the Brickmasters will take into account the missile portion they did complete. As golden brick holders, Brendan & Greg are safe from elimination. This was the last week the golden brick could be played, so we won’t see it again until next season. Showcasing their build first will be Dave & Emily with a scene from “Guardians of the Galaxy Vo. 2.” “Wow, what a cool build!” exclaims Amy. Jamie likes the teeth of the monster. Next up is Stephen & Stephen with their scene from “Doctor Strange in the Multiverse of Madness.” Jamie says the bus is perfectly suspended above the ground and their details are impressive.

9:55 p.m. — Brendan & Greg are next, presenting a scene from “Thor Ragnarok.” Amy says they approached the challenge like a “fine science,” but the background could be toned down. Next are Nick & Stacey with a scene from “Shang-Chi and the Legend of the Ten Rings.” Jamie says the background distracts him from the overall build. Last up are Emily & Liam with their scene from “Captain Marvel.” Amy thinks they did a “fab job” on the missile, but the backdrop feels a little unfinished.

10:00 p.m. — The bottom two teams tonight are Emily & Liam and Nick & Stacey. Jamie delivers the news that the team leaving tonight is…Emily & Liam. There’s not a try eye in the studio as this mother/son duo gets eliminated.