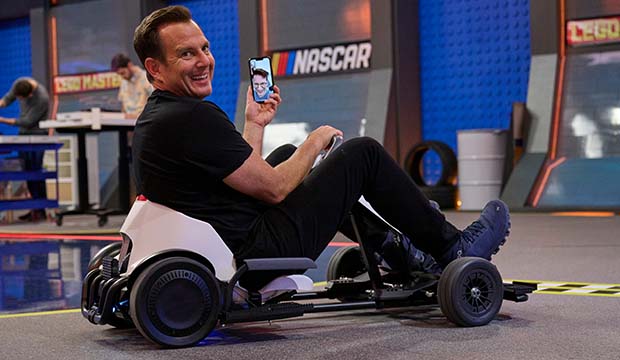 Tonight on “Lego Masters,” with only four teams left, contestants are split into red and blue teams, where they compete to build a fast and fashionable race car. Each team nominates a drive to complete 10 laps in the car they create. The most aesthetic build determined by the judges will start in first place position. The ultimate test of teamwork comes down to the lap five pit stop, where the team must work together to rebuild a Lego tire. The team that crosses the finish line first will be safe from elimination. This episode titled “Start Your Engines” airs on Wednesday, December 7 (9:02 – 10:00 pm ET/PT) on FOX.

Below, follow our Season 3, Episode 11 recap of “Start Your Engines”

9:02 p.m. — Previously, on “Lego Masters”! On Episode 10, the remaining five teams fought to stay in the competition as they recreated iconic action-packed scenes from the Marvel Cinematic Universe. Stephen & Stephen won the challenge with their “Doctor Strange in the Multiverse of Madness” creation. Mother son duo Emily & Liam were eliminated after failing to finish the backdrop of a “Captain Marvel” scene. How will things unfold tonight?

9:10 p.m. — NASCAR legend Jeff Gordon gives Will a ride around the racetrack ahead this week’s challenge. Next, driver William Byron arrives on set while Will explains teams will be pairing up to build their own NASCAR Lego race car. The Blue Team is Brendan & Greg and Nick & Stacey. The Red Team is Dave & Emily and Stephen & Stephen. While building, each team must decide who is the driver and who will be the crew at the pit stop, repairing any damage sustained throughout each lap. Only the strong builds will make it across the finish line. The teams have nine hours to build a working race car. Get your brick on!

9:20 p.m. – – Brendan will be driving for the Blue Team and crashes hard during his practice lap. Nick & Stacey begin to wonder if they made a mistake allowing this maniac to get behind the wheel. Will suggests Stacey take the wheel and go head to head with Emily on the Red Team. It doesn’t sound like that’s going to happen. With six hours to go, Will stops the clock to announce another twist: The race team with the best looking race car will get pole position, meaning they’ll start out front.

9:45 p.m. — Will FaceTimes Emmy winner Sean Hayes for a fun chat while he takes a cart around the track for a spin. Next, it’s back to business as teams continue their builds. Amy notices that the Red Team seems to be focusing more on aesthetics while the Blue Team focuses on strength. Which strategy will pay off? Time winds down and it’s time to find out who has won pole position in the race. Jeff Gordon arrives back on set to look over the “Red Rocket” from the Red Team and “Electric Blue” from the Blue Team. The Brickmasters decide the most aesthetically pleasing car belongs to the Red Team. They’ll have a slight advantage heading into this race.

9:55 p.m. — It’s now time to buckle up and watch Brendan and Emily race. The remaining members of their respective teams will be on pit crew. The first car to complete 10 laps wins the race and all four members of that team will be immune from elimination. Both drivers must take one pit stop on lap five for a tire replacement. Emily is pulling away and on the verge of lapping Brendan, likely due to weighing so much less. The Red Team hits the pit stop first and sends Emily out for her final five laps. At the pit stop, the Blue Team takes the lead with faster teamwork. Brendan is now in the lead with Emily hot on his heels. The Blue Team wins!

10:00 p.m. — Thanks to their big win, Brendan & Greg and Nick & Stacey are safe from elimination. That means either Dave & Emily or Stephen & Stephen will be eliminated. The Brickmasters have made a decision. The team leaving this week is…no one! All four teams will advance to the semi-finals.