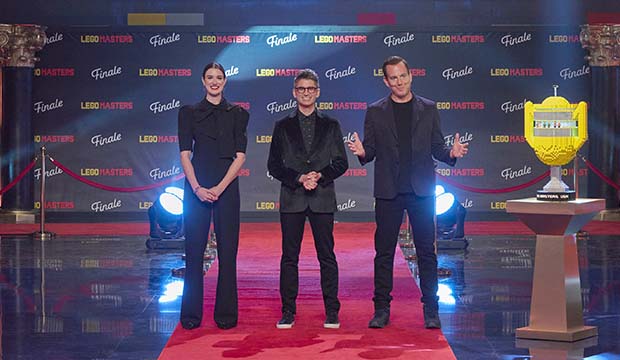 Tonight on “Lego Masters,” the semi-finalists have 10 hours to build a fountain that uses water to create movement within their build. The three teams that use water to meaningfully tell a story move on to the finale in the all-new “Water Works” part one of the two-hour season finale episode airing Wednesday, Dec. 14 (8:00-10:00 PM ET/PT) on FOX.

Next, it’s a red carpet finish as the three remaining teams get 24 hours to build their best creation possible. There’s one final twist in store when the teams are given gift bags with the first sets they built as kids to celebrate 90 years of LEGO. They must incorporate pieces from those sets into their master build and the duo with the most impressive build wins $100,000, the Master Builder title, and trophy, and gets their creation displayed at LEGOLAND New York resort in the all-new “Finale: Master Build.”

Below, follow our Season 3, Episode 12 recap of “Finale: Master Build”

8:00 p.m. — Previously, on “Lego Masters”! On Episode 11, contestants were split into red and blue teams, where they competed to build a fast and fashionable race car. Each team nominated a driver to complete 10 laps in the car they created. Brendan beat Emily to the finish line, granting himself and his brother Greg, along with their teammates Nick & Stacey. When Dave & Emily and Stephen & Stephen walked forward to find out who would be eliminated, the Brickmasters shocked everyone and said everyone was safe. Who will take home the prize on tonight’s four-person, two-part finale? Let’s go!

8:05 p.m. — The top four teams enter the build room for the semifinals. Will informs everyone they’ll be building a “big, beautiful, classy fountain.” They must incorporate movement for an unbelievable water show. The Brickmasters inform them water is the movement, not power functions. Each build should have a creative story and the teams have 10 hours to finish. For one team, this will be their last build of the season.

8:12 p.m. — The teams part ways to come up with their designs. Dave & Emily decide to build a flamingo while Stephen & Stephen plan to build a frog underneath a rainbow. Nick & Stacey get to work on a sand castle while Brendan & Greg debate whether or not a horse is too ambitious. Two-and-a-half hours pass and Brendan & Greg still haven’t decided what they’re doing.

8:30 p.m. — Brendan & Greg finally come up with an idea: I windmill surrounded by tulips. They aren’t happy with how much time they’ve wasted and begin to feel rushed. But as time ticks away, it appears as though all the teams are feeling the pressure. Will lightens up the mood by asking Emily what she will do with the money if they win. She answers honestly, “botox.” Over at Stephen & Stephen’s station, they’ve ditched the frog and will build ducks instead. Five hours remain in this challenge.

8:40 p.m. — The Brickmasters notice how much various teams are struggling. Right now it’s a toss-up as to who will win and who will lose. Nick & Stacey have decided to ditch their ocean wave in favor of something more simple. Dave & Emily look equally frustrated with their water function. This is the first challenge which seems to have flustered every team. Eventually time expires and it’s time to find out who sinks and who swims. Brendan & Greg feel defeated and say their build didn’t come out how they planned. Stephen & Stephen are definitely the most confident.

8:45 p.m. — Stephen & Stephen present “Duckies After the Rain,” There’s a little old lady feeding ducks under a rainbow. There are two water movements in the build. Amy notices their comfort in working with water and says they did a “fantastic job.” Jamie likes the spinning sun and “controlled water usage.” Next, Brendan & Greg present “Tulips in the Spring.” A nice summer thunderstorm is dumping water to help the tulips grow. There are two water functions — one from the roof of a windmill and one from a spigot that fills the bucket. Jamie isn’t impressed with how “flat” everything is. Amy is impressed by the scale of the build, but she’s disappointed the tulips don’t actually pop up like they were intended to.

8:55 p.m. — Nick & Stacey’s build is called “Crabbin’ Around.” It’s a sandcastle on a beach, housing various craps. There are two main functions — a pinwheel water wheel and a fountain shooting out. Jamie says it’s a “great castle.” Amy calls it “the kind of build I’ve been searching for you guys to make” and “it’s quite risky.” Last up, Dave & Emily show their “Flamingo with Flow.” It tells the story of Flamingo Joe, who is out for a walk and smelling the flowers. He stirs up some bees, which causes him to spit out water. While they’re showing off the flamingo, it’s leg falls off. Oh no! Amy calls it “eye-catching” and the bees are “super cute.” She’s struggling with the water flow. It doesn’t look well managed.

9:00 p.m. — Jamie announces the winner of this challenge is Nick & Stacey! The next team moving to the finale is Stephen & Stephen. The final team to reach the finale is Dave & Emily. Sadly, Brendan & Greg will leave in fourth place, just shy of the finish line. They head home with tears in their eyes, but grateful for the quality time they were able to spend together.

9:05 p.m. — It all comes down to the Firefighter vs. The Siblings vs. The Brickfluencers. Who will win the final challenge? The final three teams arrive in the build room, red carpet and all. Will informs them they have 24 hours to create their master build. “The best thing you’ve ever assembled.” A winning build will show the judges something never seen before. And they’re off!

9:20 p.m. — Dave & Emily plan on building an entire city block. Nick & Stacey will build a bookshelf filled with childhood stories. Stephen & Stephen will build a mountain scape around Lake Louise. Two hours into the challenge, Will stops the clock. As a gift, each contestant receives the first ever Lego set that they had as a child. You can see the emotions pour over everyone. Then Will said they must incorporate some of the pieces from those throwback set into their build. Nick & Stacey are thrilled because their theme was already nostalgia.

9:30 p.m. — Will stops the clock again to reveal that the winning build will be displayed at LEGOLAND New York. Then he brings out an even bigger surprise — everyone’s families! After not seeing their loved ones for weeks, each contestant becomes incredibly emotional.

9:45 p.m. — Amy and Jamie are impressed with everyone’s progress. Each team has ambitious plans and seems to be knocking them out of the park. But then, Dave & Emily notice some cracks in their build. They cover them with centipedes and hope nobody notices. Time finally expires and it’s time to put these massive builds on display.

9:55 p.m. — First up is Dave & Emily’s “City of Kaleidoscopia.” Amy compliments the “wacky story” and “fun and playfulness.” Next is Stephen & Stephen’s “Autumnal Aurora.” Jamie is in love with the story and “personal connection.” He adds, “It feels bigger than life.” Last is Nick & Stacey’s “Imagination.” Amy loves the energy and character of this build. Three outstanding final builds. But who will the Brickmasters choose as the winner?

10:00 p.m. — The team in third place is Dave & Emily. Second place is Stephen & Stephen. The winner’s of Season 3 of “Lego Masters” are Nick & Stacey! What a comeback win! After spending four weeks in the bottom, Nick & Stacey triumphed in the last two challenges of the season. Congrats to them! They’ll walk away with $100,000, the title of Lego Masters and a big ol’ trophy.